After Mimi’s candy making party, KT got the bug. She wanted to make more candy. Lots and lots more to give to her family, friends and hapless strangers on the street. What kind of monster had we created? So we took a trip to our local craft store and stocked up on some festive candy molds and all the fixins’ to make perfect candy. Of course, being The Season and all we ended up doing a bit more shopping and got home quite late. So we struck a deal that they could start as soon as both girls had awakened on their own and no burning the house down as I didn’t want to be woken up.

I’m not sure it was quite light out when KT came into my room the next morning asking if she could please wake up her sister so they could get started. She already knew that the answer was that she would just have to wait. And wait she did. Mimi didn’t wake up until nearly 11:00. We probably would have taken pity and woke Mimi up, but it 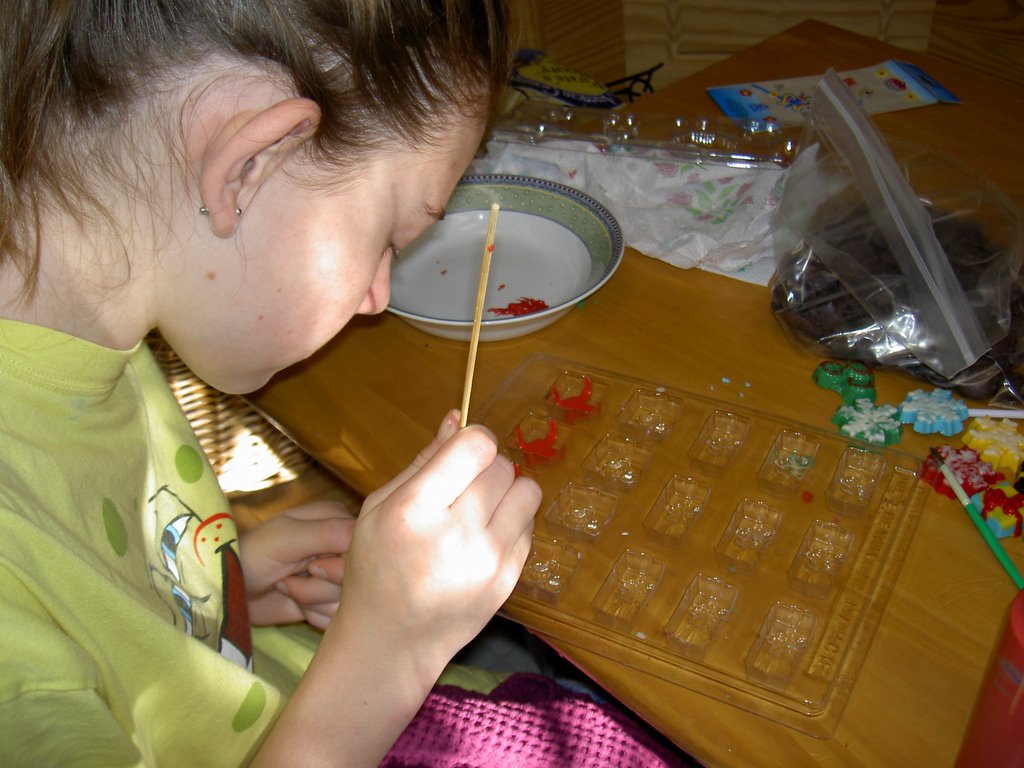 was just too much fun to watch KT agonize about it. Yes, I know, we are cruel parents.

Then the fun finally began. KT was so deliciously meticulous about getting her candy just right. She used small paint brushes, bamboo skewers and squeeze bottles to do her work. Naturally, her father kept stopping by the table trying to eat some of the masterpieces. Not because he actually liked candy, but because he knew it would drive KT nuts. She told him time and again that she would make one for him later.

So between our two wicked children, they did make a very special candy for their daddy. Hidden inside the festive green and red candy was a little extra flavoring in the form of Bertie Bott’s Every Flavor Beans. If I recall correctly they gave him earwax, rotten egg and vomit flavored jelly beans. They so sweetly brought him the candy while he happened to be distracted on the phone. With a grin, he 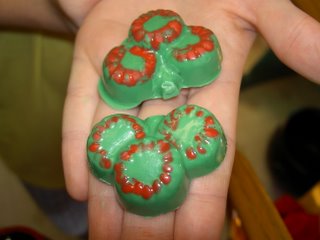 took a huge bite and we curiously watched his face transform into one of horror. He didn’t want to offend our budding chefs so he managed to calmly say though gritted teeth that he thought there might be something wrong with the candy. His face turned to astonishment when we burst into peals of laughter.

Interestingly, when they went back to their candy making he didn’t seem to be pestering those sweet little girls anymore. I don’t believe he’s had anymore of that candy either. Hmmm…

This entry was posted in A Family Affair, KT, That Man O' Mine. Bookmark the permalink.