Some would say that as parents, we are a bit over-protective. We would say that we have a fairly good balance of striving to keep our girls safe yet not stifling them. Still, it seems that we are at a point when we need to loosen the strings just a smidgen more.

The other day, I took what was, for me, a huge step towards letting go a tad. I had promised that I would take them skating sometime during break and so we did. We also invited their long-time friends to come along with us. We got to the rink and got them all settled, and then…we left all four girls there alone. I knew that they were perfectly safe, yet I have to admit that this is one of the hardest things I have ever done. I left my babies all alone to deal with whatever came up. (Does it count that they had access to a couple cell phones?)

Of course, everything was fine with the girls when I returned. I quickly searched the skaters looking for my daughters. I found Mimi right away, but to my dismay I didn’t recognize KT at first. I suddenly saw her as she really was, not as I had still been seeing her for so long. Gone was the little girl, in her place was someone else. She was now really truly a teenager. I’ve known this for a while, but it didn’t really sink in until just then.
I know it is the natural progression, but I hate that my little girl is growing up so quickly. I imagine that she will be allowed to do more and more as she gets older. That doesn’t mean I have to like it though! 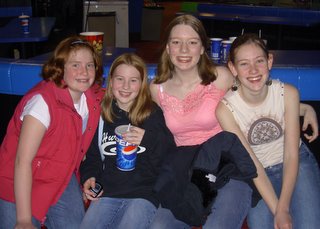 Skating Buddies. Mimi and A went to pre-school together. They have been Best Friends ever since. They don’t get to see each other as often as they like as they go to different schools and live in different towns. KT and E have been pals for just as long. The girls always have a great time whenever they get together.

This entry was posted in A Family Affair. Bookmark the permalink.