Once again we were up bright and early. (so much for being on break!) This morning we had to be completely packed as we were relocating from our hotel in Maryland to one in Williamsburg. Both of our busses took a quick pitstop at the Starbucks just around the corner. Only adults were allowed to get off. Sill, it was pretty comical to watch us all RUN to try to be one of the first in line. Those poor baristas…

We drove back into DC and were dropped off at the Holocaust Museum. We were on our own for a few hours. We were urged to at least stop in and see the Daniel’s Story exhibit that most of us had read about at home and warned that the actual museum might be too graphic. Mimi insisted that we see the whole thing. I’m really glad that we did, it made simple words come alive. To me, seeing sample boards of acceptable eye and hair colors was more horrifying than the most graphic video game. Standing in a box car that so many Jews were transported in was just heartrending. The Holocaust is something that everyone, including our children needs to know about.

After we were finished with the Holocaust Museum we went searching for something to eat. Somehow, the 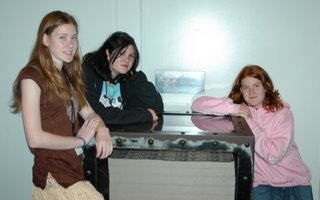 girls and I found ourselves in the Department of Treasury. There were no tours left but we had to check out the little gift shop. We had fun posing by a huge block containing a million dollars!

We found our way back to the Museum Cafe and had lunch. We 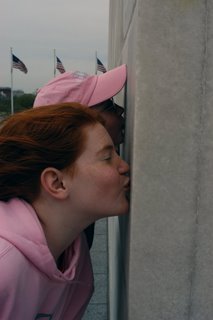 ended up running into another group and decided to hang out together. Our main goal was to get a photo in front of the White House. (such lofty dreams!) On the way we stopped at the Washington Memorial where I pursuaded Mimi and H to kiss it in keeping with tradition as with the Empire State Building. (you can pretty much get Mimi to do anything if you claim it is a tradtion…she’s big on those)

We finally got to the front of the White House. We got to the back quickly, but it was the front we wanted. I guess we 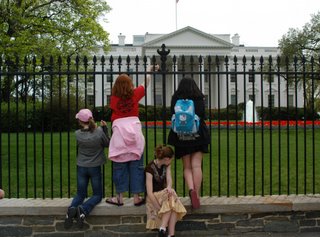 were “just on a mission”.
Directly across from the White House gates was a very interesting woman named Connie that had been camped out there continuously since 1981. She is a one woman peace vigil protesting various things relating to keeping peace. She sleeps in a cot in a small tent made of plastic sheeting. She wears helmet as a form of protection because people didn’t always like what she is protesting. I have to admire her passion.

We made way back to the bus and were headed off to the memorials. The Vietnam, Korean and Lincoln.

Soon we were piled on the bus again and were ready to make the long drive down to Willamsburg. For dinner we stopped at some sort of buffet (where they had more pizza and pasta. Yum.) It was a tour bus parking lot! We had to stay on the bus for a while and wait for it to be our turn. Apparently we were one of the last groups of the day because it wasn’t too long before the place emptied out. The next thing we knew the manager had dug out a Karaoke machine and all the kids were crowded up on the tiny stage belting out tunes from Grease and the Backstreet Boys. (Quite a few adults were singing along as well). We all had a ball!

Soon we were at our next home for the next two nights. It was a bit of a challenge figuring out where our rooms were. We didn’t realize that there were two different wings and we were spread between them. We managed to figure it out though.