Ahhh…Memorial Day. Most people enjoy themselves with BBQ, picnics, camping and just hanging out with friends and family. It’s a fun non-work/school day to celebrate the beginning of Summer. 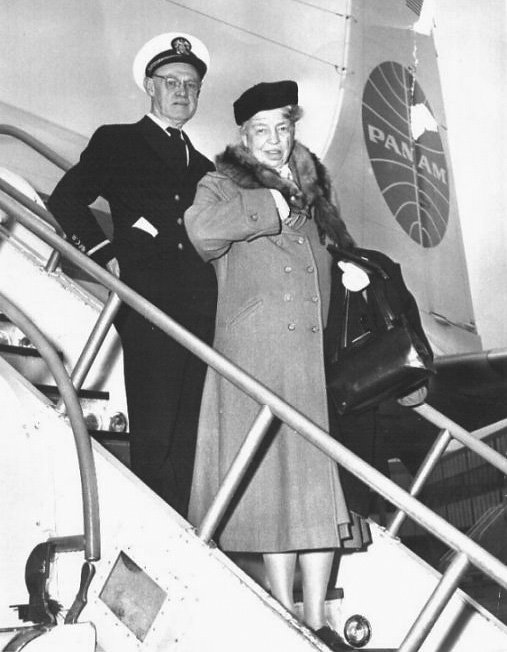 ingly, Memorial Day is supposed to mean something a little bit more. Yesterday we passed our little bitty town graveyard and Mimi counted 8 flags and several more bouquets of flowers on the gravestones. I thought this would be a good time to make a small tribute to one of our family’s veterans.

I was going to highlight my dad as he is my favorite vet, then I realized that you are supposed to be remembering those that have passed on. (I’m trying to follow the rules here!) Mimi helpfully suggested that I doctor up her grandpa’s photo so that he would just look dead. (We just finally rented The Corpse Bride and all the dead people were very appealing to her) I nixed that idea explaining to her that I didn’t think her grandpa would appreciate that very much.

So, I switched over to Shaun’s family. I remembered this amazing photo of one of his grandfathers and asked if he would mind my posting it. Nobody knows why he is posing with Eleanor Roosevelt, but isn’t it great to have?

I don’t know a lot about Shaun’s grandfather, Andrew Ivory. But what I do know is very interesting. (Ivory family? Can you fill in a bit???)

He was born in 1900 in Bray County, Dublin, Ireland. He immigrated to the United States with his family as a very young boy.

When he was 16 he ran off to join the Navy. He had to lie about his age, but he was anxious to fight in the War to end all wars. After WWI ended, Andrew decided to remain in the Navy as a Pharmacist Mate or what is now known as a Corpsman.

During WWII he was stationed on the maiden voyage of the USS Liscome Bay. This escort carrier was torpedoed without warning and lost in combat. Andrew was one of 272 sailors that survived the attack.

Andrew retired from the Navy and was later made the Public Health Officer of New York City.