When someone keeps asking me if I had put something on my blog yet…then quickly admonishing me that I had better not, I have to wonder. Then they tell me that I can take a picture…but that I had “better not put it on that blog!” I can’t resist, I simply have to take it for what it seems…a desperate plea for glory. (Such as it is!) This is going to be hard to explain, because I wasn’t there. I’ve heard the story from a few different view points and it can be tough to sort out what actually happened, but I can give you the main gist of it.

On Saturday afternoon I received an anxious phone call from one of my friends. It seems as though our daughters had gone off to collect pretty rocks together. Now, after one has collected rocks, the natural thing to do is to smash them open in the driveway. (I think they were looking for crystals or gold or genies or something like that) One of these children, not mine, had the presence of mind to pause for a moment and say;

“One of us is going to get hurt doing this” then merrily continued pounding rocks.

So…well…you know what happened, don’t you?

My wayward child brought a huge rock down upon another rock to break it. She had a moment to think “My finger shouldn’t be there” right before the rock smashed down on it. She said it just looked “funny” at first and didn’t really hurt. That was before the blood started gushing out. And before she noticed that her nail was sticking straight up, away from the finger. Then our little Drama Queen became hysterical and wanted me. The only thing was, I was at the grocery store playing chaperone for a group of kids collecting canned food for our local food bank. So I did the next best thing. I sent her father. 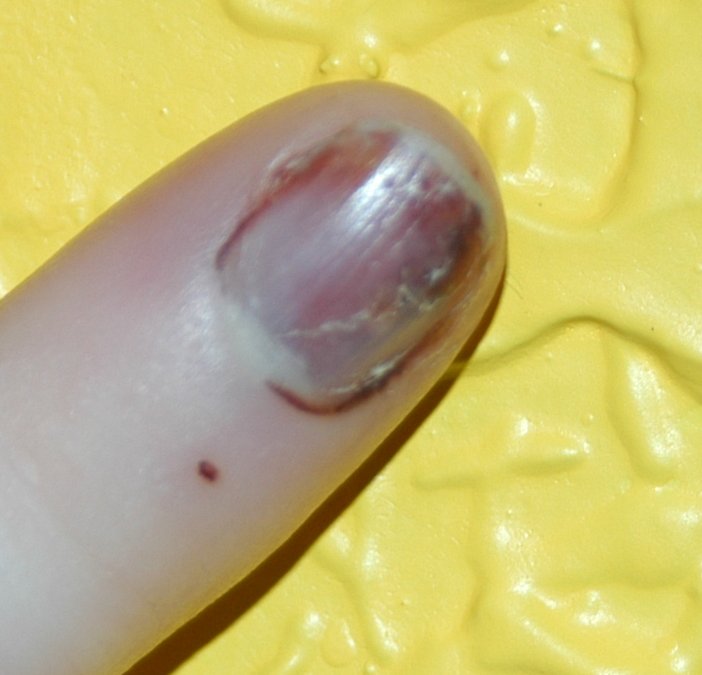 Now Shaun and I have very different views on what needs medical attention. He says I never get alarmed enough. I do tend to be very calm in these kinds of situations. This is both because nothing is ever helped by panicking and mostly because I have to counter balance him. So, he rushed our little girl off to the Urgent Care. She told me that they waited and waited and waited until they got to see the doctor. Then “they took an x-ray then put a band-aid on it.” She left out the part where they also gave her a little plastic finger shield held on with white medical tape. It looked truly awful and gave her great bragging rights at school.

When I asked our little trooper if she was planning on smashing any more rocks soon, she told me no. They already had the plan worked out to just drop the rocks from as high as they could to see if they would break that way.

Sigh…she really is her father’s child.