It’s Friday (just barely!) and Kristine has posted a brand new challenge. Gaudy stuff is right up my alley! Can you believe I actually 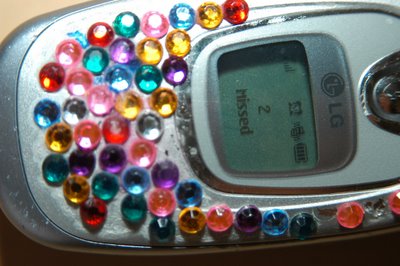 This is Mimi’s phone. She decided it needed some “bling” so she set about fixing it up. Isn’t amazing what a tube of Super Glue and some rhinestones can do? She loves this phone. Oh, the 2 missing calls? That would be me trying to figure out where I put her phone down at while I went to get the camera. I was worried for a bit that I had put it in the washing machine. Whew! Was I glad when I found it. Just imagine trying to explain that to her! 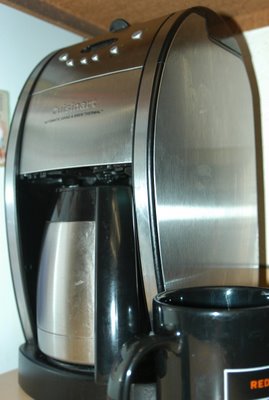 I asked Shaun what something dull would be and his response was that he hoped it wasn’t him! That made me realize dull is beyond a color (or lack of or something like that!) Then as I was setting my coffee up so it would be waiting for me in the morning I realized I had it. My coffee pot has a dull gleam (possibly caused by all those finger prints) and I’m pretty dull before I’ve had my morning coffee.

note: blogger won’t let me upload this right now for some reason. I’ll try again in the morning. 🙁

Another note: It’s morning and I still can’t load any photos even in a seperate post. I think you all are doing a great job “seeing” the flowers on you own anyways! Carry on folks!

This are the very colorful flowers that I bought to celebrate the first day of June. Aren’t they colorful? Aren’t they fun? Aren’t they gaudy? They make me smile and that’s all that matters. (I told you I like gaudy things! Shaun took one look at them, turned up his nose and informed me that he would never bring me flowers like that)