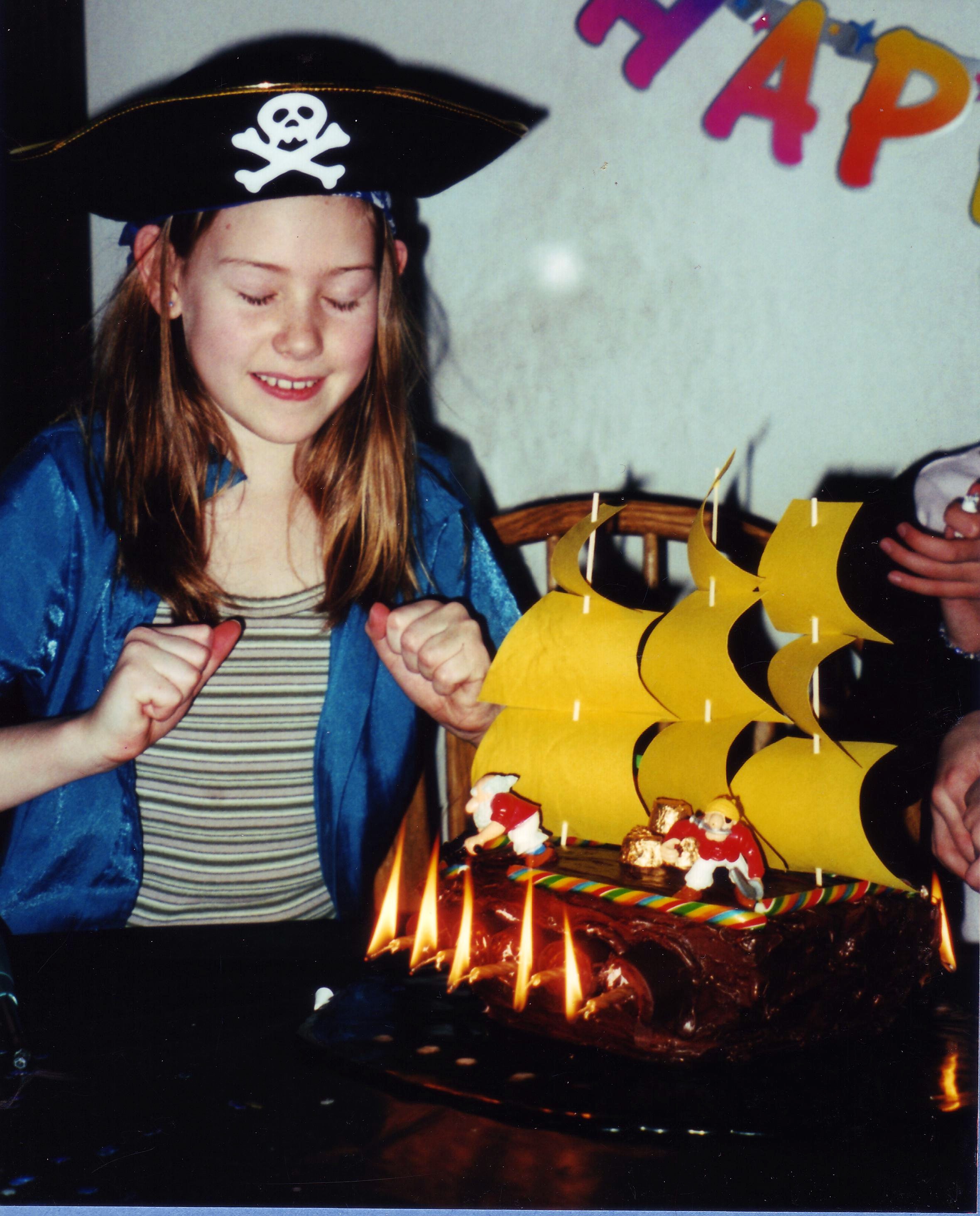 Shortly before KT’s tenth birthday, she decided that to be a pirate would be the coolest thing ever. Since our house had quickly become the home of all things pirate, we agreed to make that the theme of her birthday party. Even now, I can’t help but grin at my memories of her. I’m not sure if there is anything more adorable than a little girl, wearing a pirate hat and courageously bellowing out, “I’ll blast you scrumptious dogs!”

This was only a slight mutation on the words that her father had been roaring out right alongside her, “Avast! Ye scurvy dogs!” Only his words were a bit more “piratey” and not quite as endearing.

I can’t help but wonder if that fun-filled party with its treasure hunts, piles of “gold” and jewels and sea life games were the beginning of her current quest to become a marine biologist. Or maybe it was just the simple-as-it-seems passion of adventurous, swashbuckling pirates? (I can only hope this doesn’t lead to leather clad motorcycling Badboys)

It won’t come as any surprise that KT LOVES “Pirates of the Caribbean”. She was in heaven when the first one came out. Of course she owns the DVD. (Actually, I think it was a gift to her sister, but somehow KT has taken it over). On opening day of the sequel to “Pirates” she was so there with her flock of friends. They giggled and swooned over the charms of the dashing Will Turner with a couple sighs leftover for Cap’n Jack.

The next day, KT told me that she really wanted me to see the movie with her. I’m still not quite sure if she  wanted to share the movie with me or is she just wanted to see it again. Regardless, I told her that we could go during the week as I didn’t want to battle opening weekend crowds. That worked out fine for her as she insisted that I watch the original movie to “refresh my memory”.

So Tuesday afternoon we found ourselves seated to watch the movie. Before the movie began we were entertained by a herd of small boys running back and forth in front of the screen proudly showing off their pirate clothes and fencing skills. (I just know KT was dying to be up there with them!) When the movie started we were mesmerized. It was so fun! (Only I wouldn’t take little ones. It seemed to have a lot more violence. The little girl next to me spent the entire movie with her head buried in her mother’s neck) The time just flew by and too soon the movie was over.

Blinking into the sunlight as we left the theater, with the Disney’s “It’s a pirates life for me!” song  and images of Cap’n Jack going through my head, the one thought that kept going through my mind was, “Scrumptious dogs, indeed!”

I hear the next one comes out for Memorial Day….