Fun at the Drive-in

This past weekend, KT wanted to have a very special sleepover with a couple of her friends. She wanted for us to take them to see a drive-in movie. So after much discussion, some hemming and hawing I finally agreed to take them.

We loaded up on provisions, heaped a mountain of blankets and sleeping bags in the Mom Mobile and were ready to head out. Shaun decided that he didn’t want to come because we wouldn’t all fit in his Jeep he didn’t want to be subjected to a Chick Flick. We drove the 45 minutes to the theater and by some miracle we managed to be fifth in line. (I’m not known for being over prompt)

As we waited in line, I idly listened to the girls chat about the movie Grease and certain rocking van scenes, (Hello! You’re fourteen!) while I watched the theater’s scruffy employees. One of them started making his way down the passenger side of our line. I watched as he knocked on each window and motioned for them to roll it down before he spoke to them. When he got to our car, the first thing I said to him was “You don’t seriously want me to open this window to a Psychopath, do you?” He laughed and gave me his message. When he was gone, the girls turned to me in horror. They were shocked at my rudeness. That was until I pointed out the fact that, in addition to his crazy eyes and his long, wild wanna be dreadlocks, he was wearing a shirt that said “Psychopathic”

When the cashiers came out every car in line immediately started their engines and started revving them. I wasn’t quite sure why they were doing that, but I figured I might as well too. (Besides, it embarrassed the girls!) 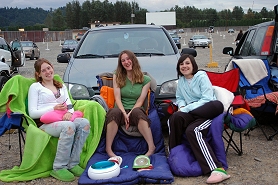 We paid for our tickets and found ourselves the primo spot…second row, dead center. Mimi and I decided to stay in the van while the girls quickly set up camp in front.

Fortunately, the car next to us was a mom with teenage girls too. They made great neighbors that we had fun chatting with.

I was getting ready to take some more pictures when one of the employees approached me to tell me I wasn’t allowed to do that. Huh? He explained that it was because of piracy laws. I tried to understand the reasoning as it was still light out and there were no movies playing anywhere. He couldn’t answer any of my questions and was getting a bit upset that I dared to ask in the first place, so I let it drop. (I also didn’t tell him about the guy a few cars down with a video camera…he should’ve been nice to me)

All in all it was a fun night. One movie was fun, the other was really dumb and a bit more risqué than I was expecting. We came home and despite the vows made to stay up all night, the girls went straight to sleep! (Of course it was nearly 2:30 when we got home)

I may even be willing to take them again sometime!

This entry was posted in Adventures, KT. Bookmark the permalink.

8 Responses to Fun at the Drive-in