Mimi at the beach 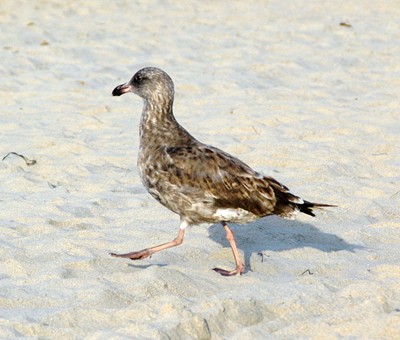 Even as a wee little thing, our little Mimi had always been enthralled by the sensation of touch.  As I would hold her in my arms, she would caress my cheek and rub my hair between her fingers.  When she became old enough to feed herself she would have to experience her food first, smashing it between her fingers and smearing it on her face and hair.  As a toddler, she would shed every piece of her clothing and escape the house to blissfully roll in the sun kissed grass. In the past ten years she has matured enough that she keeps her clothes on and hardly ever smears food in her hair and face anymore. Yet still, she needs to touch everything.

So it didn’t come as any surprise that the first thing she did when we arrived at the beach was to fling herself onto the sandy shore and start playing with the sand.  Then she started asking her big sister if she would play with her.  Her sister of course had gotten much too old to play in the sand…even at the beach.  Mimi eyed her grandmother, gave a tiny shrug, then swiveled her eyes towards me.  Sigh…I knew what I had to do…

I thought that we would be able to build a magnificent sand castle, complete with moat and sea weed flags.  Mimi had other ideas though.  She gleefully dug a gigantic hole and like a bold pirate king ordered me to climb in.  I told her that I would rather walk the plank then climb in that gritty hole and be buried alive by her!

Sadly, my girl is just as stubborn as her mother and I soon found myself sitting in the chasm she had created.  I had balked at having my entire body buried so we settled on just my legs.  She piled and patted the damp sand down around my legs until she had a small mountain.  Then she asked me if I could move my legs, chortling with excitement when I informed her that I only my wiggle my toes, and that it was with great difficulty.

She helped to unearth me, and then quickly dug another hole and jumped in.  She demanded that I bury her legs.  Apparently, I wasn’t doing this rapidly enough because she started sweeping all of the sand on top of herself.  Strange child that she is, Mimi wanted to make sure that she wouldn’t be able to move her legs either. 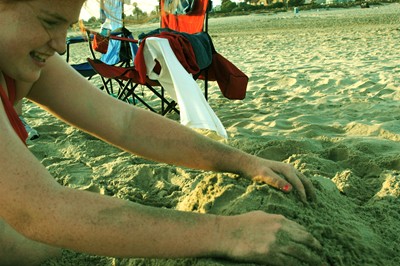 When the sun started going down and the light wind started to chill us, we decided it was time to leave our giant playground.  When we arrived at the car, KT and Gma delicately brushed the sand from their feet and step inside.  Mimi and I rigorously scrubbed and swiped at ourselves in a futile effort to get the gritty sand off of our bodies.  We did the best we could but were far from clean.

It was a good day for all of us, but mostly for little Mimi.    This was a day in which it was OK to be barely clad and in touch with all the wonders of nature.  She was able to once again experience the salty flavor and cold wetness of the ocean, and the sun warmed, coarse feel of the sand.  I can’t help but think that she was completely in her element. 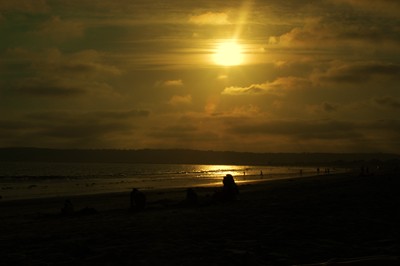 This entry was posted in Adventures, Mimi. Bookmark the permalink.

7 Responses to Mimi at the beach