Today is Shaun’s nine year work anniversary. This means that nine years and two days ago I tearfully hugged friends and family goodbye and stepped onto a plane at Lindbergh Field.  After about three hours, we stepped off a plane at the SeaTac Airport and set off for a bold new adventure.

Despite the fact that I’m a Navy brat, I grew up living in one house. When I moved out, it was to an apartment only a couple miles from my childhood home. I stayed in that apartment for years, switching out my roommate for Shaun. I even gave birth to one of my children in that apartment. (I have mentioned that I don’t like change, haven’t I?) The thought of moving away…from my parents, all my friends…everything I had ever known, was terrifying. I knew this was an opportunity that we couldn’t pass up though. We had always discussed moving to a more family friendly environment, I guess deep inside, I didn’t really think it would happen.

I can remember coming out of the airport with a couple of suitcases, two small children and a cat. We drove down the 405 in our rental car armed with nothing but a map to our temporary housing. Soon we came to a city with tall skyscrapers on either side of the freeway. I excitedly told the girls that we were in Seattle. Shaun, who had been out here on his interview, gently informed us that this wasn’t Seattle, but only Bellevue. I sat there gazing around me in wonder. I was trying to imagine how big Seattle could be if a town I had never heard of was this big.

Washington has been good for us. We’ve been fortunate to have made such a happy home for ourselves. We’ve made exceptional friends and have had wonderful times. We still love exploring this beautiful state and just being together. We are all thriving. (And despite what my nay saying California friends said so many years ago, I love the rain.)

Shaun loves the job that he didn’t really think he was qualified for in the first place. He is constantly challenged and always engrossed in his work. It is rare for him to be bored with his work….something that hasn’t always been true. (And, speaking from experience, a bored Shaun is someone that will drive you nuts). He does work some crazy hours which can be hard on the family. But it’s a small price to pay. (And he’s always there is we need him to be)

About the candy? Apparently there is a company tradition that on your anniversary, you bring in a pound of candy for each year you’ve been there. I’d never heard of this before. (in fact the girls and I were wondering if he was making this up) It seems that Shaun’s current team is one of the few that actually observes this tradition. What a fun way to celebrate. 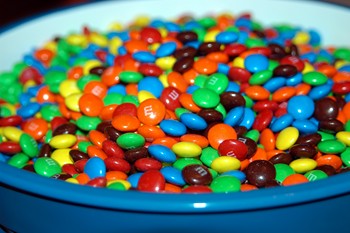 So, here’s to nine pounds of candy!

This entry was posted in A Family Affair, Adventures, Random stuff. Bookmark the permalink.

8 Responses to Nine Pounds of Candy