All that Annoying Hair

Our Little Mimi has always had a fascination with hair removal of one sort or another.  When she was three, she locked herself into a closet with a pair of scissors she had surreptitiously acquired.  She emerged from her hiding place delighted with her brand new hair do and positive that nobody would know what she had done.

When her hair finally grew out a year or two later she happened upon her cousin’s razor in the bathroom.  She decided then and there that it would be a wonderful idea to shave off half of one of her eyebrows.  The result was stunning, to say the least.

Forbidden to use scissors for anything other than paper and razors ever (if she could even manage to find any!) our little girl started to look normal for a while.  But the urge to trim those wayward hairs never went away.  Last year, in sixth grade, Mimi decided that she needed to shave her legs. After all, her older sister shaved, a lot of girls at school were shaving, and well…she wasn’t going to be a baby forever.   It took a bit of convincing on her part.  Our little girl just wasn’t very hairy, but she finally received her very own razor for her twelfth birthday and permission to shave.

I was all set to show her how to use them, but she informed me that she had been practicing with a comb for months and already knew how.  still, being her mother and all, I insisted that she showed me how she was planning on doing this.  I wasn’t really too surprised that she did indeed, know exactly how to go about shaving.  A month or so later we had to have the talk about shaving only her lower legs and armpits…and no where else!

Last week, Mimi decided that she wanted bangs.  I did my best to remind her how much she didn’t like bangs.  I told her about how long it takes for them to grow back and mentioned anything else I could think of to pursuade her to now want bangs.  Being her father’s child, she was undeterred.  She wanted bangs.  Having already taken school pictures, I finally gave her permission to cut her bangs.  Then I asked her if she wanted me to do it.  She was actually relieved that I had offered.

Armed with a pair of sharp scissors, I started trimming her bangs.  She told me that she wanted long, wispy bangs. Even though  I informed her  that I had to cut the hair to the proper length and then thin it out a bit to get the wispy effect, Mimi still didn’t quite trust me.  Every time I would snip, she would dart off to the mirror to see how it was looking.  When they were even, but still in need of a little more work, we realized it was time for martial arts.  We left the house and she fretted about her bangs so much that I took her into the little haircut place across the street to have them fix it after her training.  (for some reason she doesn’t squirm when they do it!)

She came back to me looking like a little boy with a curled under “bowl” cut! Although she was near tears, Mimi couldn’t quite admit that she hated the new look to the stylist.  I had no such qualms.  I marched her back in and asked the gal to turn her back into a girl! She did, but now the bangs came to nearly the middle of her forehead.  I calmed her down by reminding her that her hair would be longer when it wasn’t all curled up. 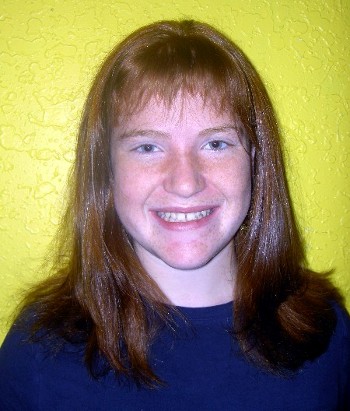 The next morning Mimi got up early and used her flat iron to straighten her hair.  She was content with her new look.  Until she got to school that is.  There were a couple of really nasty comments, a little bit of sympathy and a fair amount of positive comments. Like most people, Mimi only heard the nasty comments. So she decided to fix her hair again, using her favorite tool, the scissors.

Needless to say, Mimi is once again forbidden cut her own hair….

Note: the above photo was taken before the very last trim job

9 Responses to All that Annoying Hair