Since becoming an inside cat a couple months ago, our cat Buddy had really let himself go.  He pretty much just laid around the house sleeping.  He’d gained weight and his personal hygiene had really gone downhill.  Our sweet boy was filthy and he stunk! We hemmed and hawed for a while and then finally decided that we were going to have to give him a bath.

Despite the fact that Buddy is one of the most laid back and gentle natured cats we have ever come across, we were still pretty nervous about the prospect of bathing him.  He is a big strong cat with sharp claws and teeth.  Shaun got out his heavy rubber gloves while I got out old towels and the pet shampoo.  We filled one side of the sink with warm water and we were ready to go.

The plan was that Shaun would hold and I would wash.  So Shaun gingerly picked up the cat and placed him in the sink.  Right away, Buddy knew something was up because all creatures know they are strictly forbidden to be on the counters and tables.  I started to gently pour the warm water over him and massage the shampoo onto his quivering body.  Apparently massaging wasn’t what we were going for as Shaun made me switch places with him so that he could start scrubbing the grubby beast.  (I have to admit he did a much better job than I was doing). 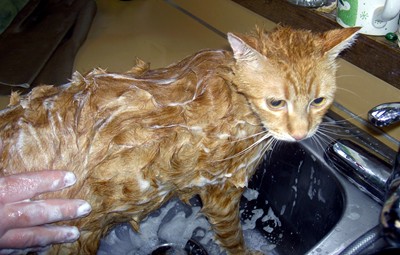 When Buddy realized that I wasn’t going to let him get away from me, he started yowling.  I realize that we were supposed to feel sorry for him and just let him go at that point, but it was just so cute and pathetic.  When he finally decided that we weren’t really going to kill him (just torture him) he just laid in the bottom of the sink, resigned to his fate.

Just about the time we were finishing up, the front door opened and in walked the girls.  They had just gotten off of the school bus and were horrified to see what their parents were up to while they were away.  “What are you doing to that cat??!!” screeched Mimi. KT, used to such strangeness from us, just rolled her eyes and started taking pictures as we asked her to. 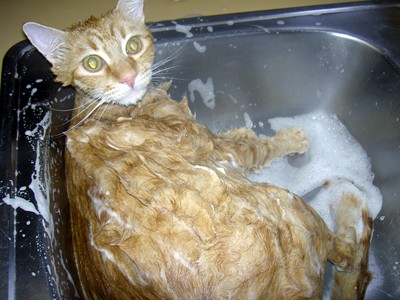 We fully expected Buddy to avoid us for the next month or so.  But our damp kitty plopped himself down on my lap shortly after we were done with him.  Now he’s a sweet smelly lumpy cat.  I think he likes being clean again…I just hope we don’t have to do this next week…

Shaun put together a fun little slideshow thing with the photos KT took.  You can see it here

This entry was posted in Critters. Bookmark the permalink.