OK, so I have been a very bad blogger.  Um….I was on Sabbatical, yeah that’s it!

So, last night we stopped by Miss E’s and her Dad came hauling out my cake plate and a little gift card for me.  (wasn’t that sweet?)  I’m supposed to go back today and get the monkey although I have no idea where I’ll store it.   What monkey you ask? Well look on,  I’m showing pictures by request. (One thing about not blogging for a little bit, you get lots of calls and emails asking when the heck you are going to blog again.  I’m starting to feel like Sally Fields!) 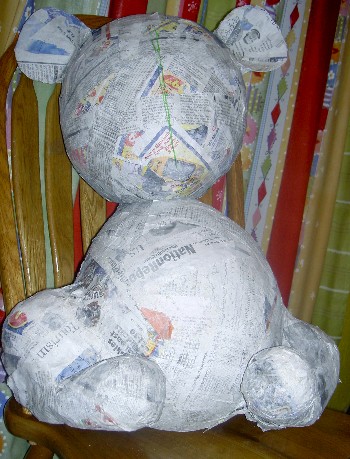 This is Bob the Pinata, looking a bit more like a teddy bear instead of an alien like he did in my last post.  He still really doesn’t look like a tiger to me! 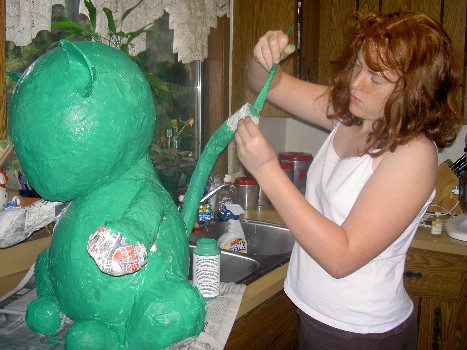 While they were working on the banner, Mimi worked on painting Bob.  Now, most people think that tigers only come in orange.  Usually they would be right, but when the Birthday Girl’s favorite color happens to be green, tigers will sometimes make an exception. 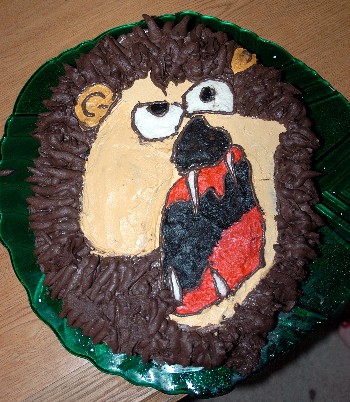 While they were working on all that stuff, I decorated the cake.  He looks a little off because he was originally looking the other way and had a much bigger nose.  It didn’t work without being attached to a body so I had to redo him a bit.  Sadly, he never got a name.  Even sadder, KT realized that she had stashed some leftover cake in the oven (that’s where we hide sweets from ourselves) and forgot all about it.  Oh well… 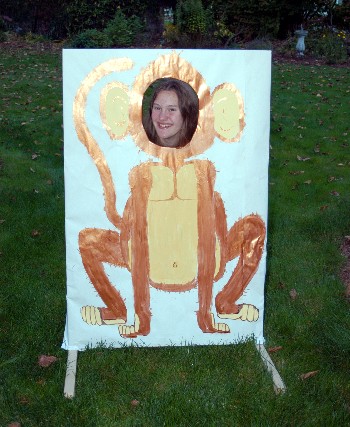 This is the monkey.  Shaun slaved away making the wooden stand for us while we were all sleeping.  KT and I covered it with butcher paper and I had about half an hour to get it painted.  Just for fun I used metallic copper paint for that extra little shine! I think it turned out pretty cute for a rush job!

It was also supposed to be a beanbag toss game, but I never managed to get the requested banana shaped beanbags made.  I told them to just throw tennis balls through…they’re yellow! 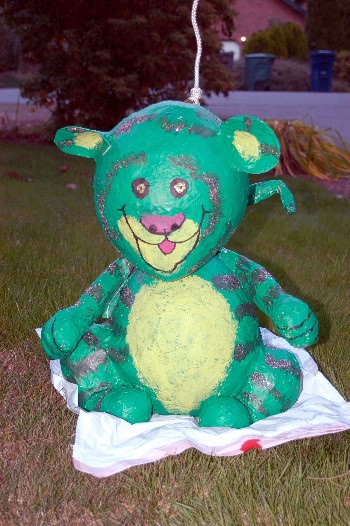 Poor Bob.  He was finally finished (although he didn’t turn out quitelike I had envisioned.  Don’tcha just love the glitter for stripes though?) I had hoped they wouldn’t hang him.  I even “forgot” to put the wire handle on the back of him.  Miss E’s dad was just too resourceful for me though.  At least he clung to dear life and was really hard to break.  (OK, maybe I shouldn’t get so attached to my creations!) 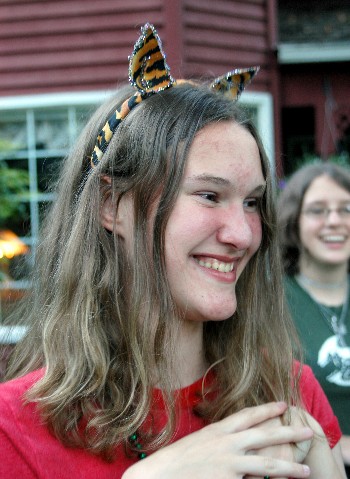 Miss E (wearing the tiger ears that I also made with sparkly glitter) had a very happy birthday! She knew something was up, but they still managed to surprise her!

KT and D worked really hard on this party.  They did all the planning and all the shopping.  Yes, I did end up doing a lot of the work, but I also had a lot of fun doing it.  And I was more than happy to put all that work to such a great kid.

And I’m really proud of my kid for wanting to do this for her friend.