When KT was about two, she ran into something and got herself a doozy of a shiner.  It didn’t seem to hurt her much, but she was rather alarmed at her appearance. (Yes, even at that young age, she loved looking at herself in the mirror!)  We decided to convince her that all those lovely colors were beautiful.  It worked.  She loved nothing more than admiring all the gorgeous shades her bruise turned.  As I recall, she was sad to see it go. 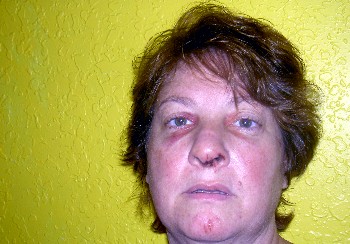 This picture was taken a day and a half after my incident.  The swelling and bruising had just begun.  It got much more colorful! While I don’t exactly think my two shiners are beautiful, it has been rather interesting to watch how my face changes daily.  I’m still really sore and have huge bruises on my shins, chest and wrist.  The discoloration and swelling on my face is almost gone.  The stitches have been removed from my nose and it looks as though the scarring will be minimal.

People’s reactions are fun too.  I’ve pretty much stayed holed up a home, but sometimes you just have to go out.  Some people will ask with concern what happened all the time shooting murderous glances at poor Shaun.  (I don’t know why some people think the worst.  Shaun would never hurt anyone) When I tell them that I fell off the roof, most of my “friends” laugh! (I’m not really sure what that says about me or my friends.  I guess they just know me too well!) Some of them want to hug me and all I can do is frantically chant “don’t touch me, don’t touch me”

Other people, the ones that either don’t know me as well or are just trying to be polite, try hard to pretend that they don’t notice anything different.  Yet they keep glancing nervously at my face and back away at something…anything…different.  Is it bad that I don’t enlighten them?

I think next time I want to look at pretty colors on my face, I will try make-up. After all, that’s what KT does and it’s been working pretty well for her…

(Thanks for everyone’s well wishes by the way!)

This entry was posted in Love and Marriage. Bookmark the permalink.