One down…one to go

This weekend we celebrated Mimi’s birthday with a slumber party.  Mimi (and probably most of her friends) would have been perfectly happy with pizza and a pile of DVDs, but KT didn’t consider that a proper party.  She insisted that we make is special.  (I wonder where she got that from?)

Because of being house bound for a few days we really had to scurry in order to get everything ready.  We came up with a few craft ideas and had to gather all the stuff to make them with, bought some pretty paper partyware and decided on the cake design.  We were ready!

Three girls cancelled out at the last minute which really made the size of the gathering nicer.  (What’s a zillion giggling girls minus three?)  They started out making Fruit Loop necklaces (no that wasn’t myidea) and just chatting about nothing in particular.  When the last girl arrived it was time for them to get busy making their dinner.  I had made a triple batch of pizza dough crust (This was the first time I did it without a bread machine so I was crossing my fingers that it would work out!) The girls got to pull out their crust in any shape they wanted and put whatever toppings appealed to them on their own personal pizzas. I was so relieved that they turned out so well. 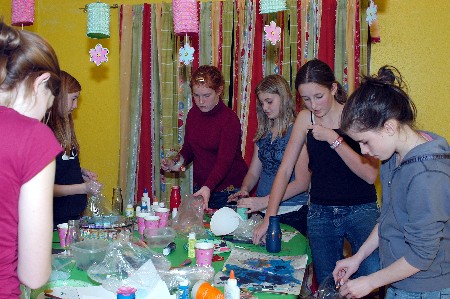 We went on to decorating wooden initials and making bath salts.  I was pretty sure they would rush through this in no time, but they worked on these for a couple of hours. I think they turned out pretty nice. 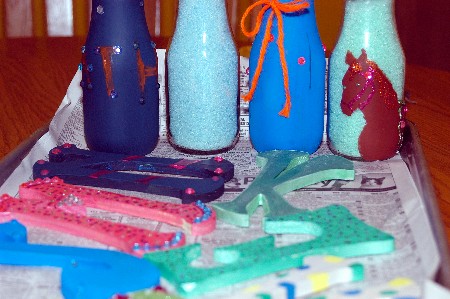 After all that exhausting work, it was time for cake and ice cream.  Mimi had put the candles all the way around the cake before she realized how hard it would be to blow them out in one breath in order to get her wish.  So one of her friends spun the cake around really fast and to our amazement, Mimi got them all blown out! 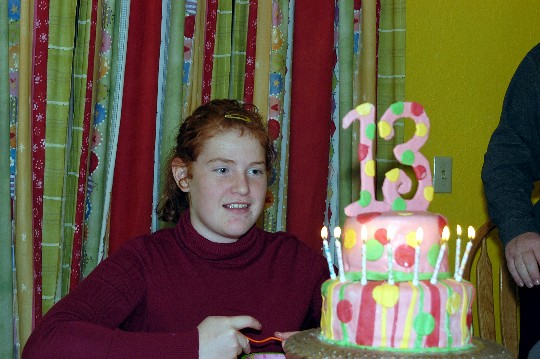 After cake, we all sat around the table telling stories about the worse, grossest thing that ever happened to us.  (Can you guess who started this topic?)  I kept expecting the girls to get tired of having the parents around, but they really seemed to enjoy chatting with us.  Well, except for Mimi.  She was a bit embarrassed, but that’s typical of her and we are pretty good at ignoring it.

They finally went downstairs where they were supposed to watch a movie and then go to sleep.  I put Shaun in charge of making sure they didn’t go crazy.  He did a good job of that….but it never occurred to him to make them go to sleep.  Apparently the last one didn’t fall asleep until about six.  Ugh! 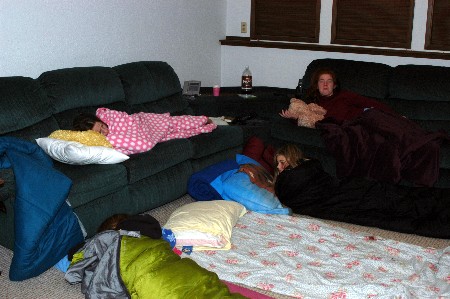 I had a hard time waking them all up at 11:00 so they wouldn’t be complete zombies when their parents came to get them.  All in all, it was a fun party. They all had a great time.  Happy Birthday to our little girl!

11 Responses to One down…one to go