A Walk Along the Slough

It’s hard to believe that just last week I was whining about our snow storm and griping about being unable to leave the house because of all the ice.  Today, we had a heatwave…it was fifty degrees! (Yeah, I know…if I still lived in California I would be bundled up and think I was freezing to death!)

One of my girlfriends and I had already decided that we were going to meet at the slough for a walk today.  We were pretty excited that the weather turned out to be so nice.  (Ok, we grumbled a bit about the sun being in our eyes, but that’s all we could find to fuss about) I don’t really have anything to write about, so I thought I’d just share a couple of photos with you.  (what you don’t haul along your camera when you go for a walk?) Just a couple though because I have to have something to go on the photoblog! 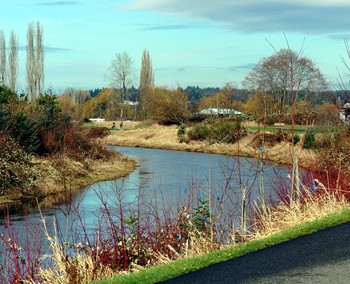 This is what we call the slough….despite all the new signs telling us we are on the Samamish River Walk.  It’s a nice paved trail right along the water.  It’s great for walkers, joggers, bikers and moms with strollers. 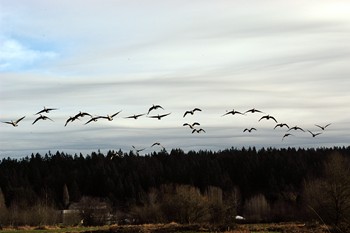 These geese took off from that field right in front of us and flew straight over.  It was kinda magical! 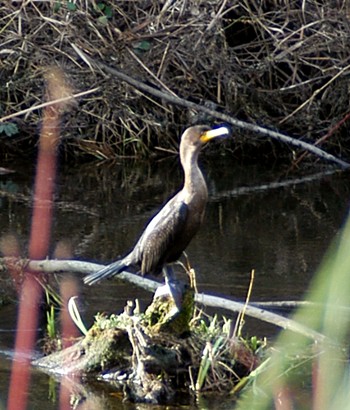 Another really cool bird.  My girlfriend told me what it was called, but I can’t remember what she said.  I think it started with a “C”.  Anyone?  Of course, my friend also told me that some other big black birds that were landing on the water were crows.  Um…I don’t think so! (Yes, I get to tease her about that for a very long time now) 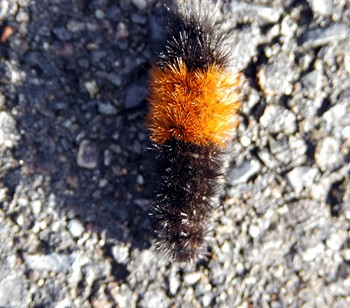 This little thing is actually a caterpillar…in January!  He was in a huge hurry to cross the trail (and who could blame him with all those bikers?)  so I had a hard time capturing him.  My girlfriend was pretty sure he would eventually turn into a monarch butterfly.  I’m still pretty sure he won’t…they don’t usually live here.

I’m crossing my fingers and hoping that tomorrow is just as wonderful.  I’ve heard from two different sources that the Framer’s Almanac predicts one more snow storm this year.  I sure hope it’s wrong….

This entry was posted in Adventures, It's all about me!, Ya gotta have friends!. Bookmark the permalink.

13 Responses to A Walk Along the Slough