When you live in a family of girls, it goes without saying that you are going to use a lot of toilet paper.  It’s used for so much more than its intended purpose.  We use it to pick up icky things, rescue spiders, dab on and off make up…well, just all sorts of silly things.

I finally gave up on the four packs of squeezable Charmin and went with the industrial commercial Costco size.  The only problem with this is storage.  What does anyone really do with twenty four rolls of paper?

Fortunately, we have plenty of room beneath our bathroom sinks.  The only dilemma is getting it all tidily placed there.  I figure that’s what kids are four.  (After all, if we didn’t have them, we would still be using Charmin!)  After taking a couple of rolls for the seldom used downstairs bathroom, I asked each girl to put half of the remaining rolls in a bathroom.

One of my children immediately set to work taking rolls out of the bag, while the other worked on something else.  A short time later, I came back to check on my girl.  She had neatly stacked her rolls under her assigned sink.  She had also stacked the other half of the rolls in a neat pyramid…right outside the cupboard her sister was supposed to put them in! 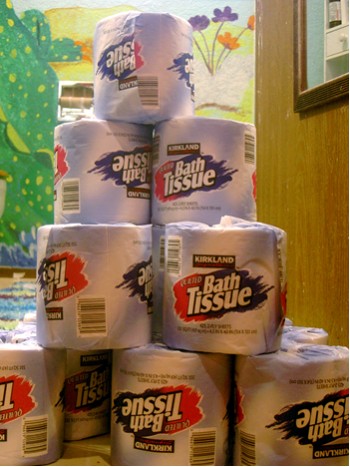 Apparently, they had kept falling out of the bag.  She knew that she would be busted if she just left all the rolls in the middle of the floor, yet she didn’t want to do her sister’s work.  That’s how she came up with her perfect solution.  Sigh…

This entry was posted in KT, Mimi. Bookmark the permalink.

10 Responses to The Perfect Solution