When my girls were tiny, nothing delighted me more than hauling out the sewing machine (well, OK, I never really put it away as I should have) and creating an adorable little outfit out of a yard of fabric, some lace and maybe some snaps or a button or two.

Halloween was paradise for me.  I could create the most outlandish outfits and have the kids thrilled to wear them.  (They were much more appreciative than Shaun ever was!)  One of my girlfriends even had me make costumes for her sons as well.  She would take all the kids for a few hours while I would sew.  I think that we were both convinced that we each had the better part of the deal.

As the years went on, and the girls got bigger, it became much easier and more economical to simply purchase clothing.  The only time I sewed was near the end of October.  KT insists that I make her a costume each year as it is a tradition.  Mimi doesn’t really care, you know how it goes, whatever her big sister gets… 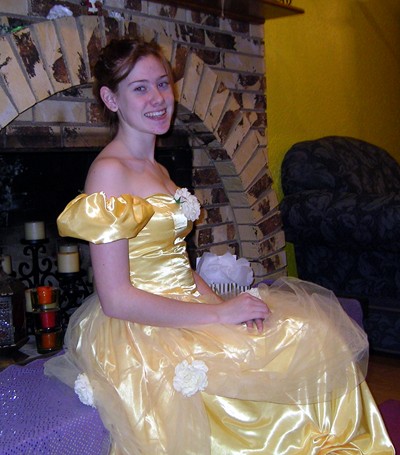 The other day, KT had a brilliant idea. While they were the mall, they were looking at all the gowns. She decided that instead spending zillions of dollars to get an “okay” dress, for her semi-formal 9th Grade Party (we have junior high here) that I should just make her the perfect dress.  Um…

So we went to the fabric store and looked at patterns and fabric.  (I learned to my dismay that my child thinks glittery, sparkly stuff is tacky. How can that be??? )  It was a tough decision…nothing seemed just right.

Somehow, we went from making a formal to making a Spring Dress.  We purchased everything we needed and placed it on the table when we got home.  I promptly forgot about it…for a day…until KT started to jabber on how she really didn’t want to become a nag of any sort.  She really, really wanted to wear the dress on the first full day of spring.

Being the indulgent mother that I am, I told her that I would start working on it last night, but that it most likely wouldn’t be done in time for her to wear to school.  She sadly went to bed and I got busy.  Around one in the morning, I tried it on her my sleeping child.  To my horror it didn’t quite fit!  I had to get inventive to make it work.

This morning, I tried it on her again and found that my adjustments had made it too big.  Thankfully, I hadn’t put the zipper in yet so I could still make it work.  It’s not the best work I’ve ever done.  I didn’t really have a way to properly fit it, but my little girl was thrilled to be able to wear her brand new dress to school today.

It may take a little more than a yard of fabric and a bit more work to make an outfit my little girl is delighted to be wearing.  But I still think it is worth it. After all, as Shaun keeps reminding me, I won’t have them with me forever….

22 Responses to Stitches of Love