A Day At The Park

This morning I woke up to a blindingly bright light shining directly in my eyes.  I stirred just enough to yank the covers over my head in order to block the light and mutter some really unkind words at my husband who was obviously having a great time pointing a search light straight at me.

An hour or so later (Hey it’s the weekend!) I woke up again to realize that the intense light shining in my eyes was none other than the sun streaming through my window.  I immediately jumped out of bed eager to run outside and enjoy a day of beautiful sunshine.  (Ok…that might not be entirely true.  It might be closer to the truth to say that I squinted my eyes and staggered to the kitchen to start my coffee brewing…but I tend to not let nit-picky little details like that bother me!)

A sunny day may not be a very big deal in certain parts of the world, but here in Seattle…in the middle of February…where we are all resigned to endless weeks of gray skies…it’s a huge deal. We didn’t have any major plans for the day (well, other than collect Mimi from the airport) we just knew that we wanted to be outside playing.  After much consideration, we decided that we would bring our puppy Sam to the park to work on training and  “socializing” him with a few people around to distract him.

It had been quite a while since we went to the park to play.  As we all piled in the van, the girls chattered about which park we would go to.  (For some reason they had decided that the one by our house was “boring”) It was fun listening to them recall some of our favorite parks that we had gone to when they were little.  There was the Train Park, where there was a huge wooden train structure that was perfect for climbing on.  The Goose Park, where we learned that rolling in autumn leaves isn’t such a great idea in a park that geese like to well…poop…in.  Of course we always loved the Chocolate Chip Park.  Bits of recycled tires had been layered under the playground toys and we naturally decided that they were chocolate chips…even though they didn’t taste like chocolate chips. (don’t ask how we know that!) Then there was the very hilly Park-Where-Mimi-Learned-to-Ride-Her-Bike. Any one of these would have been perfect, all we had to do was decide which one.

If we had thought about it a bit, we would have realized that any easily accessible park would be jam packed with sun seeking people.  We drove by a few different ones looking for one that wasn’t overflowing with people, bikes and dogs.  We had nearly given up hope when KT remembered an out of the way park she had been to and gave her dad directions on how to get there.

This park was still crowded, but at least we could find a place to park.  We slowly  (everyone wants to pet an adorable puppy) made our way  to an empty patch of grass and let our pups romp around joyfully.  We even got a little bit of training in. 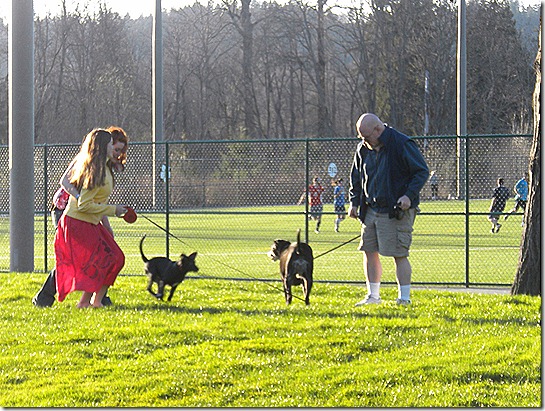 All in all, we had a glorious day. It was good to have our Mimi back (she’d been in Idaho all week), the sun was shining and we were just happy to all be together.

This entry was posted in dogs, Family, It's all about me!, KT, Mimi, That Man O' Mine and tagged being together, day in the park, dog, dogs, Family, park, puppy, puppy training, sunny day. Bookmark the permalink.

9 Responses to A Day At The Park