From Soup To Stitches

For Christmas this year, my youngest daughter Mimi chose to give me the gift of time and of knowledge.  She knew that I needed to take a class of some sort in order to cross it off of my list of 45 Things and decided to do something about that.  (as well as do something she had been wanting to do!)  So Mimi got her dad to signed us up for a cooking class at our local PCC.  (a Seattle area natural foods market)

After waiting for over a month for our class to start, Mimi and I were excited that the night it was being held had finally arrived.  We were all set to learn how to make tantalizing soups using fresh winter produce.  (Shaun and KT were all set to taste test them for us!)

At exactly 6:00 Mimi was impatiently waiting in the car for me (for some reason she seemed to think that the ten minute drive would take us half an hour) when I came rushing down the stone steps that lead to our driveway.  I’m not quite sure what I did, but I suddenly found myself sprawled on the steps howling at the top of my lungs and trying not to use all those words this sailor’s daughter learned at a young age.

I glanced down at my shin and immediately looked away.  I simply wasn’t prepared to see my leg covered in blood. Lots and lots of blood.  I quickly hobbled back into the house and headed toward the bathroom sink with a horrified Mimi trailing right behind me.  I plopped my leg into the sink with the intention of cleaning the wound, but found that it was all I could do to stand there, hanging onto the door for balance and try not to bawl.

Thankfully KT, (who was probably alerted to the problem by the sound of my head  pounding on the bathroom wall) arrived and calmly asked what I wanted her to do.  I asked her to bring me some peroxide and a band-aid.  She started to pour the peroxide over the gash before declaring that I needed stitches.  I just glared at her and covered the lower half of my leg with an oversized band-aid.

Mimi gathered up my insurance card and ID then made a few phone calls to contact her father and let PCC know that we would be missing the class while KT bullied me into going to Urgent Care to get my leg looked at.  The next thing I knew the girls, the puppies (I guess they didn’t want to miss out on the fun?) and I were all headed downtown to the nearest Urgent Care.  (I have to admit that it was kind of nice being looked after.  I’m so proud of my girls)

I knew from the nurse’s sharp intake of breath when she peeled the band-aid off that KT had made the right call.  I was going to be getting a few stitches.  I just sat there, still pretending that my leg was fine and wishing that one of us had grabbed my camera.

Nearly two hours and twenty six stitches later, I left the Urgent Care along with a prescription for Vicodin and orders to get X-rays done in radiology the next day.  Now, my head is woozy from the drugs (so it’s not my fault if none of this makes sense!) and my leg is throbbing.  It’s past time for me to be in bed.

I wish I had a nice warm bowl of soup though…

I just remembered…the nurse asked me when I had last had a tetnus shot.  I shrugged and started to say that I had no idea when Mimi interrupted  and said that it was two years ago…when I fell off  the roof.  The look of shock on the nurse’s face was priceless.  (OK, I might have a strange sense of humor…) 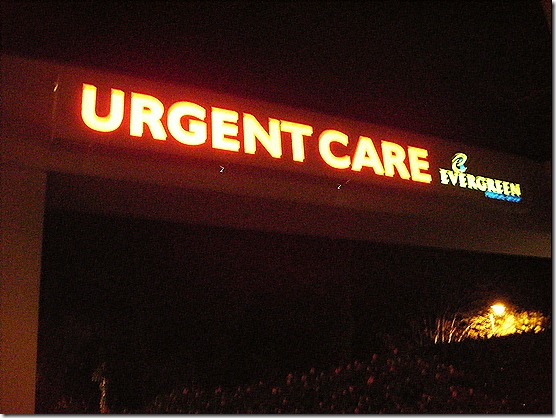 Photo of the day compliments of Mimi

This entry was posted in It's all about me!, Random stuff, Teens and tagged cooking class, medical care, PCC, stitches, Urgent Care. Bookmark the permalink.

12 Responses to From Soup To Stitches