Tales of a Naughty Puppy

Our puppy Sam has officially reached the really, really naughty stage.  He’s finally figured out that there are just some things that he’s not allowed to do…and he doesn’t care.  Well, he does care, but only if he gets caught.

Yesterday we found him running around with an onion. I had no idea where he got that onion, but he had decided it was his and he wasn’t letting it out of his sight.  If we came near him, he’d dash off in the other direction with his onion. I’m not sure if he thought that he had scored with an exotic new food or if he thought it was just a funny tasting ball.

I managed to lure him over to me and traded him the onion for a Cheerio.  (Have I mentioned how brilliant he is?) Amazingly, there wasn’t a single bite mark on that onion.  I may have put it back in the pantry.

This morning, Mimi came around the corner just in time to see Sam stand up on him hind legs and snag her breakfast that was waiting for her on the kitchen counter.  She tore after him in an effort to save her bagel.  When she managed to capture him, only half of her meal was left.  For some reason, she no longer wanted to eat that half.

We do work with him, trying to teach him right from wrong and train him correctly.  He can sit, lay down, stay (kinda), come (when he feels like it), and stay off (if you happen to be standing there) I’m hoping this naughtiness is just some sort of stage like the Terrible Twos.

Have I mentioned that he graduated from Puppy School last week? 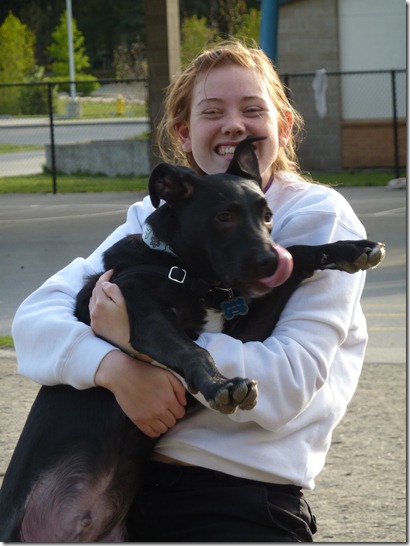 11 Responses to Tales of a Naughty Puppy