Just When You Think They Are All Grown Up

This afternoon, I needed to make a quick stop at Costco. I usually go by myself, but today I drug my kids along with me.  For some odd reason, my girls thought that the oversized shopping carts would be perfect for them to climb into.  I just laughed, then started pushing them around.  (They are so much heavier than they were ten years ago!)

I have to admit that it was a lot of fun to see people’s reactions at seeing two nearly grown girls squished in there.  The other (much smaller) children were delighted.  Most of them giggled and returned the waves that KT and Mimi gave to them.

The adults…well…some of them looked at my teens in disgust, but most of them just grinned.  I think they secretly wanted to be chauffeured around too. 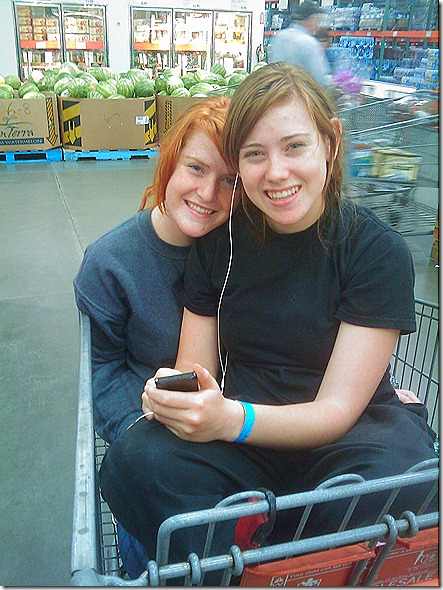 And to think, one of these is going to graduate this evening…

This entry was posted in Adventures, Family, KT, Mimi, Outside the box, Teens and tagged Costco, graduation, riding in shopping cart, sisters, teenagers. Bookmark the permalink.