The Spicy Side of Life

When I was growing up in San Diego, my idea of chili was a combination of hamburger, onion, beans and mild chili powder with a few other spices tossed in for good measure. I was just as happy eating the homemade version as I was the stuff that came out of a can.

When my husband Shaun discovered this about me, he nearly had a conniption fit.  You see, he had grown up in Taos, NM where they take their chili very seriously.  Nobody in the entire state would dream of adding beans let alone use the dusty container of chili powder from the back of the cupboard.

In New Mexico, every self-respecting cook starts off with real chilies. Not the kind you can buy in the can, but fresh ones.  Apparently, the very best ones come from Hatch, NM. I have no idea where that is or why they are considered the best, that’s just the way it is.  Authentic chili (according to Shaun…I’m still attached to my beans…just don’t tell him that) comes in either red or green.  Shaun’s preference…and therefore mine…is green.

Every so often, Shaun gets a little bit homesick for some great green chili and sopapillas.  (little fried “pillows” of yeast dough…simply heaven in your mouth!) So…he orders a huge box of fresh chilies. 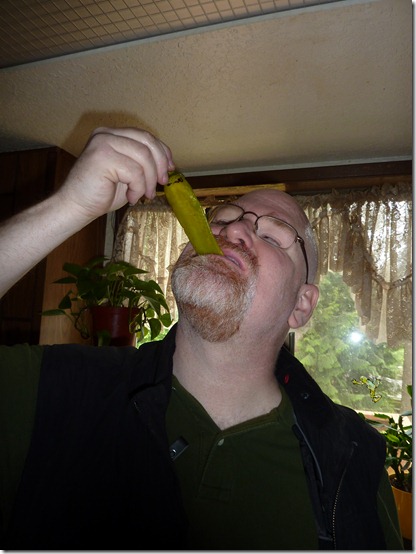 This time, they aren’t quite in season for the fresh ones, so we now have a freezer full of fire roasted, peeled, seeded green chilies.  I know that it won’t be too long before Shaun makes an enormous pot of green chili (he doesn’t seem to know how to cook for a normal family size)

In the meantime, we’ve seen lots of salsa. I think Shaun (and maybe KT) are the only ones eating them.  Mimi and I…well…we don’t do spicy stuff.  It’s a constant battle to get my husband to make some salsa that won’t send steam through our ears.

This evening, Shaun was whipping up yet another batch of salsa with a bit of assistance from Mimi.  She considered it her primary job to get him to make extra mild salsa.  I had to laugh at their conversation.

Shaun: Someday after I die you’ll realize that you like spicy food and then you’ll think of me.

Shaun: It’s in your genes, you have no choice in the matter.

Mimi: Dad. No. I’m not going to like it. I think I came from the milkman.

9 Responses to The Spicy Side of Life