After visiting the somewhat world famous Gum Wall, we all piled back up into the van and headed back to pick KT up from her volunteer gig at the Seattle Center.  Our next Mission that we chose to accept was to head back over the 520 bridge to the Eastside and the Microsoft Campus.

Shaun drove us all around, in and out of some of the grounds.  Aunt Edie was fascinated with the narrative, but I knew what she really wanted…she wanted a picture. Shaun obliged by telling us to quickly get out of the van while we were stopped at a red light, telling us that he would circle around to get us. (Gee, thanks Sweetie!) 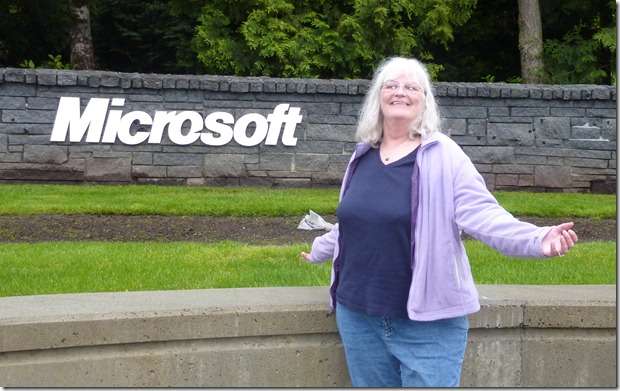 Look at the joy on that woman’s face.  See, dreams really can come true!

Usually that big glob of dirt behind her is filled with beautiful flowers. They must have been changing them out while we were there.  When I suggested to Aunt Edie that she get closer to the actual sign, it only took her a moment to agree.  She climbed up and headed towards the stone wall, muttering about how wet her socks were getting the entire time.  (That’s why we wear real shoes with out here!) 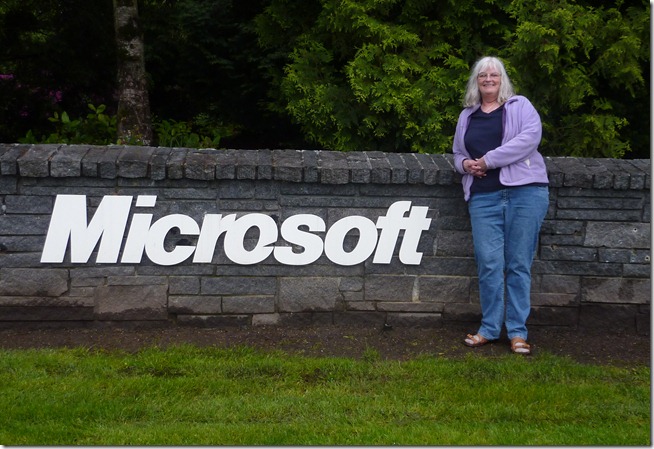 I just love this picture of Aunt Edie.  She looks so content…and look how green everything is. Apparently she was more than content, because the next thing I knew…she had burst into dance! 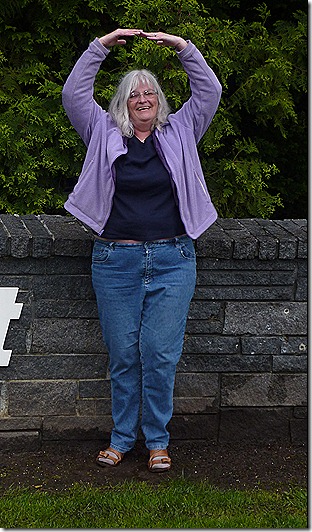 About that time we started wondering when our ride was coming to pick us up.  Then we spotted them down the road waiting for us.  The cowards. 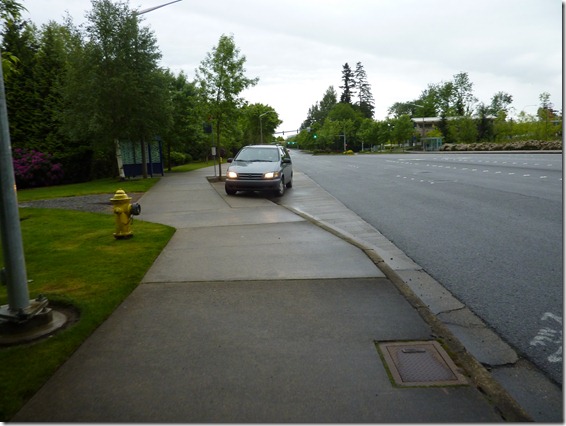 Note how empty the street is? The entire town was that way…everyone was home having a rainy Memorial Day BBQ…or something.

The next day we headed over to the Google offices.  Aunt Edie (Uncle Jim was still with as, he just has no interest in the same geeky things his wife does) wanted a shot of the big balls that roam from office to office.  We stopped a security guard and asked him if he knew where there were some we could take a picture of.

The handsome, yet overzealous guard went on red-alert when he realized that we weren’t simply walking through the parking lot with cameras, but that we actually wanted to use them. Just think of all the pictures I could have taken of the outside of an office building if I hadn’t flagged him down.  Hmmm….maybe I did take a couple after all.  That Edie sure does like to dance! 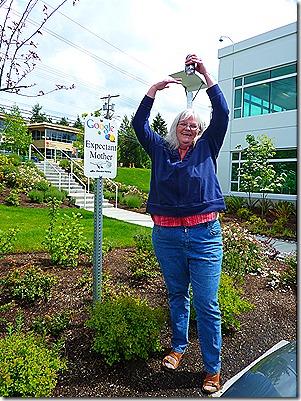 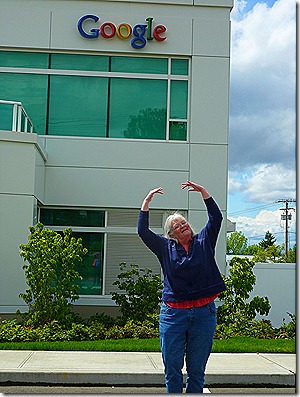 I still say phoey on Google.  I guess that’s just one more reason I like Bing better.

Our visit with Aunt Edie and Uncle Jim was fun…if a bit unusual.  We are glad that they included us on their Nationwide Tour Extravaganza and really hope we don’t have to wait ten years to see them again.

I find it amusing to know that the next stop is to see my niece Tomi…who also really loves to pretend she’s a ballerina!