Hiding Out In The Monster Closet

Vacations are a lot of fun, but let’s face it, they are also a lot of hard work.  From the anticipation, the packing, and the endless driving to the disruption of routine, unpacking and loads of smelly laundry. I was so ready to be home when we pulled into our driveway late last night.

This morning, I nearly threw my alarm clock against the wall when it went off shortly after the Crack of Dawn.  I must’ve set it out of mere habit last night before I wearily collapsed into my bed.  As I rolled over to go back to sleep, I realized that Shaun was wide awake…and wanted to chat.  He didn’t seem to take the hint when I sent evil muting stun ray towards him with my half-awake mind. So I made the mistake of grunting at him.  Instead of running in fear for his life, the foolish man took that as an invitation to continue talking.

I had nearly convinced him that I was actually a cooling corpse and not worth his time,when both the girls and some assorted pets decided to come bounding in our room as well.  (I still don’t understand why nobody seemed to realize that it was summer vacation and thus practically a law to sleep in until noon.) It seemed as though Mimi needed a ride to work, Shaun wanted to go get his Jeep that had been worked on while we were away and KT just didn’t want to be left out of anything.

We spent most of the day just being together…just as we had been doing all week. Every time I would leave the room just to get some space, someone would follow me. It was slowly driving me insane. I seem to be one of those rare people that just needs time to be alone in a quiet place.  My family is anything but quiet.

Please try not to think badly of me, I really do love my family, but I had to get away from them. I knew that I couldn’t go anywhere as they would catch on and want to come with me. I tried distracting them with fun places for them to go…but they didn’t want to leave me behind.  I was at a loss.

Then I finally remembered the Monster Closet.  It’s a small closet tucked underneath our staircase that, until about a month ago had been crammed full of junk.  We are all so used to not even noticing the door anymore that I doubted anyone would even think to look for me there.  My plan is to gather up supplies such as a flashlight, good book and a snack then wait until everyone is preoccupied.  I’ll leave to quick note letting them know that I had been abducted by aliens and not to worry about me, then run and hide.

I can’t wait to hang out with just the monsters… 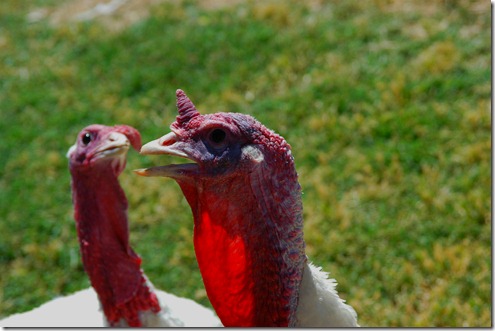 Say hello to my new friends I met at Farm Sanctuary.  I like to call them the Gentlemen Turkeys.

This entry was posted in Adventures, Family, Humor, It's all about me!, Teens, That Man O' Mine, Traditions and tagged hiding from family, Monsters, vacation. Bookmark the permalink.

30 Responses to Hiding Out In The Monster Closet