The Hunt for Dinner

On KT’s last night before heading back to her school on the other side of the state, we decided that we would take her out to eat at one of her favorite vegan restaurants.  It’s a small Jamaican sandwich shop just outside of Seattle’s U District. Heading over the bridge into downtown is a huge pain, but the food is wonderful and besides, KT is worth it.  Little did we know that such a simple thing as going out for dinner would end up becoming such an adventure.

KT and I left the house with just enough time to fill up the gas tank before we picked Mimi up from soccer practice.  Our next task was to circle around to pick Shaun up from work.  (I just happened to notice that it was 21.6 miles from the gas station to Shaun’s office.  I have no idea why that number stuck in my head when I still haven’t managed to memorize my own social security number  Somehow it only seems right to share that mileage with you.) My Beloved reluctantly  gallantly agreed to drive us over the floating bridge, through rush hour traffic to the restaurant.  (It has absolutely nothing to do with the fact that I popped into the back seat with Mimi and refused to climb back into the driver’s seat.  I’ll do anything to avoid driving in Seattle.  In my book, it’s right down there with driving in the ice and snow.)

During the summer when all the UW (University of Washington) students are on break, the area is practically a ghost town.  Now that classes have started up again, we could barely drive through the congested roads for fear of hitting a kid darting across the street.  It appeared as though finding a parking spot was going to be an impossible task.  We drove up and down every street we could find hoping to snag an empty spot.  Every time we drove by the sandwich shop, Mimi would inform us that it looked closed.  We just shushed her because we knew it couldn’t be closed.  After all, we had looked up the hours to be sure and the website informed us that it stayed open fairly late.  We had plenty of time.

We were thrilled when we finally found a spot several blocks away. We happily bounced out of the car and headed toward the restaurant anticipating the spicy Jamaican cuisine.  Of course, our Mimi was right.  The lights were out and the door was locked tight.  Apparently they had decided to close early.  Needless to say, we were devastated….and very, very hungry. 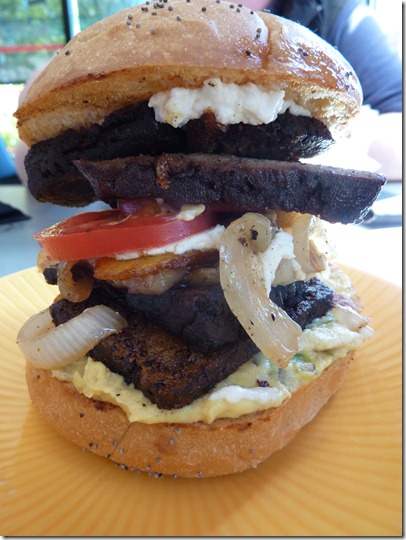 This is the Jamaican Sandwich we didn’t have

It was rapidly getting dark.  We needed to quickly discuss our options.  We didn’t really want to hunt around for another place that serves vegan food, so we decided that the best plan of action was to head back over the bridge to the Eastside.  We have a favorite Szechwan restaurant that we know is open late.

An hour and a half, and about five thousand miles after KT and I left our house, the four of us finally settled down to a wonderful family meal.  Once our hunger was sated we were able to laugh about our Great Dinner Hunting Adventure. It was decided that next time KT comes home for a break, we’ll hit the Jamaican Sandwich shop for lunch.

As for the Chinese place, well, we can (and do) go there anytime.  After all, it’s only about two minutes away from Shaun’s office…

5 Responses to The Hunt for Dinner