Our Little Mimi had gone into the kitchen to make herself a mid-day snack.  She had tried her best to get me to make it for her but I was very busy playing Bejeweled doing some Very Important Things and told her to make it herself.  After much grumbling she finally stomped her way to the kitchen and started banging things around.

It wasn’t long before I heard her talking. Now I don’t normally listen to other people’s conversations, but this time I made an exception.  Especially since she was the only one in the kitchen.  Her conversation went like this:

Leave it open, pop in in the microwave for two minutes.

Now clean up my mess.

By the time Mimi had gotten to the plopping part, I knew that she was making a bean burrito.  She had asked me to show her how I made them because according to her, mine always tasted better than anything she ever made.

Naturally when showing her the very complicated step-by-step instructions to make my special bean burrito, I had to jazz it up a bit by making sound effects.  The sound effects seemed to have made a huge impact on Mimi as she diligently took notes on them…and repeated them when she made her own burrito. 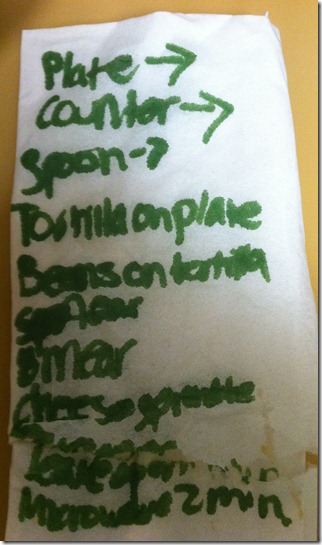 Poor kid, she’s going to end up just as goofy as her mother, but at least she’ll know how to make a decent burrito…

3 Responses to Cooking With Mimi