We were all downstairs rotting our brains watching fascinating documentaries when Mimi suddenly grabbed one of my hands and told me she was going to give me a manicure.  I looked at the bottle of fire-engine red nail polish in her hand and grabbed my hand right back.  There was a time in my life when I would be fine with such a bold color, but I think I’m a little beyond that now.

Mimi argued that I’m always asking her to give me a manicure and that anything would look better than the way my hands looked anyways.  I looked at my poor abused fingers and decided that she was right, anything would help.  I agreed to let her do her magic with my nails…as long as it didn’t include fire-engine red.  I watched as she selected a pretty pink from her vast collection and then let her get to work.

I was engrossed in the intellectually stimulating show about….um…um…underwater basketweaving and wasn’t really paying attention to what was going on with my nails.  Apparently I should’ve been. 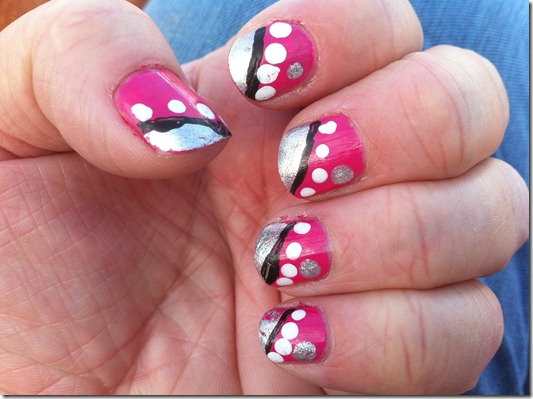 Aren’t they lovely? And look, not a drop of fire-engine red!

This entry was posted in It's all about me!, Mimi, NaBloPoMo. Bookmark the permalink.

9 Responses to My Special Manicure