When Mimi realized that I had work on Friday, and she didn’t have school, my child immediately decided that I needed a Sous Chef.  (or maybe it’s Assistant Instructor? {I teach an adult/child cooking class on Fridays}) I agreed to let her come in with me as long as she behaved herself and got up in time.

Much to my surprise, Mimi got herself up and dressed without too much prodding for me.  She helped me haul my supplies in the classroom (which happens to be an old converted house) and get set up.

Then she grabbed an apron, plopped a toque on her head and started dancing around. 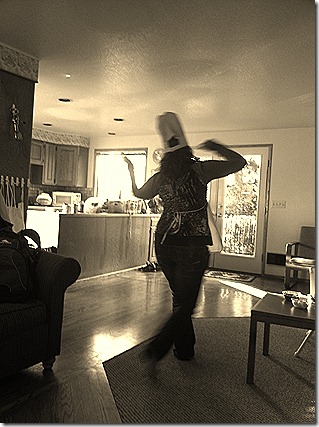 I just shook my head and grinned at my goofy girl.

When my cooking students and their grown-up arrived, they just stared at Mimi. They didn’t quite know what to make of the stranger in our room.  (She had taken off her uniform/costume by that time) When I introduced her as my baby girl, they just looked at us dubiously.  Once I added on the “She got big” disclaimer, all was well. 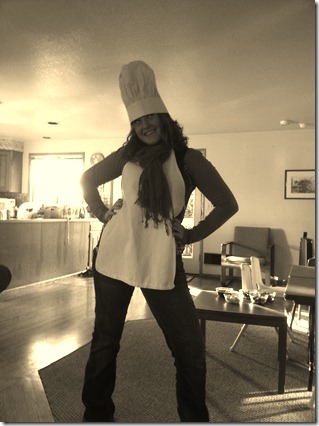 It turned out Mimi was a huge hit.  (She always has been a bit of a Pied Piper as far as kids go) Moms were asking her if she babysat and the kids…well, they just seemed enamored of her.  Most of them just watched her and gave her shy smiles. 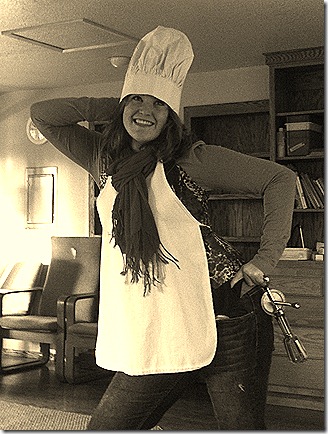 One little girl decided that Mimi was the best thing she had ever seen in her life.

“Mommy, I have to do it like Mimi does”

Sigh…I just know I’m going to have a lot of explaining to do next week when Mimi isn’t there.  That’s the problem of letting Mimi come to work with me. 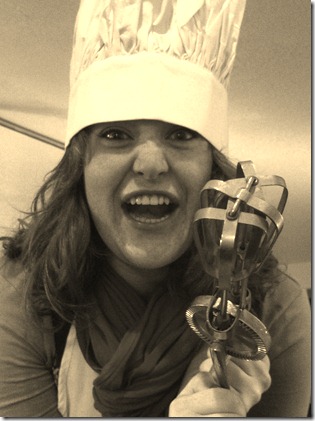 This entry was posted in Food, Humor, Mimi, NaBloPoMo and tagged cooking class, parent/child classes, take your daughter to work. Bookmark the permalink.