When you send a kid off to college, there’s an unspoken agreement that said child will be sent Care Packages every once in a while.  Poor KT, she ended up with a mother that has a strange phobia of actually sending things.  Well…not really a phobia, just a bit of forgetfulness or something like that.

The first package sent to our girl was an easy one.  It was the Sunday after we first dropped her off in her new dorm.  There were a few forgotten things that she needed and we, in our emotional state, were only too happy to send to her.  I still remember the incredulous looks on the faces of the Fedex clerks as they watched up pack up box full of snacks, a pair of jeans and lots of similar items to be sent overnight.  It wasn’t until we tucked in the brand new cell phone that they understood the urgency.  KT’s aging phone had finally sputtered it’s last breath and there was no way in the world we could stand to be cut off from her.

KT’s second Care Package sat on the table for at least a week before I finally decided I could fancy it up a little bit by writing her address on a large paint chip I happened to have. Something about the gaily colored yellow strips encouraged me to send it right away.

The next month, I stared at the boring brown box wondering what I could do to jazz it up a little bit.  About that time a (very naughty) cat jumped up on the table and tipped over a roll of paper towels.  Hmmmm, my brain started twirling.  With a little bit of glue and a lot of silliness, KT’s next package from her Mummy was ready to leave the house.  It looked a bit like this:

I say a little bit because I had my doubts about the mummy making it across the state safely and covered it with packing tape.  It wasn’t quite the same effect, but still fun.

KT’s last Care Package hit the Post Office a few days ago.  I really wanted to make a Turkey as it was so close to Thanksgiving.  Only it seemed a little odd to send one of those to my vegan child.  So, I made a turkey (working with preschoolers really helps those creative juices flow with silly ideas) holding a sign (OK, you have to imagine it holding the sign…I kinda, sorta forgot the wings.  Poor feller..) that says “Happy Tofurkey Day!) 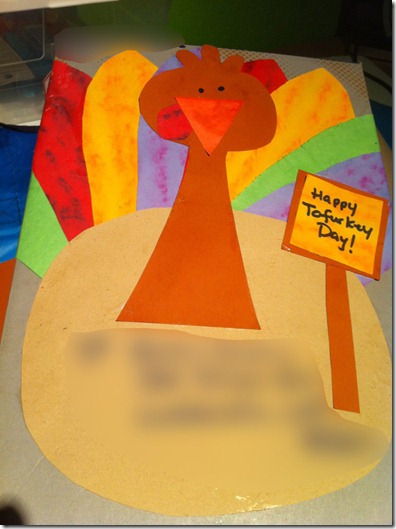 The lady at the post office was so sweet about KT’s box as she ooooed and aaahhhed over it. Then she helped in the creative process by carefully placing the stamp on the sign post.  She didn’t want to harm the turkey at all.

I have no idea if what KT thinks about my goofy packaging as she hasn’t said a word about it.  I guess it doesn’t really matter what she thinks as I’m having a fun time with them.  I’ve got a zillion more ideas…in fact, I just might start sending her empty boxes…that’s much more fun (not to mention cheaper) than finding things to put inside of them!

This entry was posted in Crafty, Humor, It's all about me!, KT and tagged care packages, crafty, Fedex, holidays, Post Office, Whitman College. Bookmark the permalink.

16 Responses to The Care Package