Shortly before Christmas, my oldest daughter Kaitie sadly informed me that my gift from her was going to be late.  As one who has been the recipient of such treasures as beautifully crafted macaroni necklaces and meticulously painted rocks, waiting a few days for something special didn’t bother me one little bit.  I fully understood that paint can take a while to dry.

A few days after Christmas, a familiar brown truck (It seems we did a lot of online shopping this year) pulled in front of our house and dropped off a small cardboard box.  Kaitie proudly presented the package to me and dance around as I slowly opened it.  I couldn’t help but laugh when I saw that she had ordered a copy of the movie “Chitty Chitty Bang Bang” for me! I had seen a few commercials advertising the movie that had always been a special part of my childhood Christmases.  It seemed that my joyful nostalgia had made an impression on my thoughtful daughter.

My family was ready to settle down to watch this amazing movie with me that very evening.  That was until I explained to them that we had to make popcorn balls first.  When I looked at their confused faces, it dawned on me that they really didn’t understand how this tradition from my youth worked.

It was usually a week or so before Christmas that my mother would haul out her heavy pot and place it on the stove.  She would allow my brother and I to help her measure out sugar, molasses and other ingredients while she started popping corn. Then I, as the oldest was allowed to carefully stir the hot mixture and watch the candy thermometer slowly crawl to the hard ball stage. When the perfect temperature was reached, Dad would poor the hot syrup over the waiting popcorn and mix it all together.  As soon as it had cooled down a little bit, we would all butter our hands and carefully form the popcorn into what would soon harden into crunchy, yet chewy balls of sweet goodness.

It never failed to amaze me that shortly after we were done with our labors, “Chitty Chitty Bang Bang” would come on our television.  I always assumed that it was some sort of Christmas Magic…brought on, of course, by making popcorn balls.  It wasn’t until I was explaining this wonderful mystery to my girls that it occurred to me that my mother may have known about the TV Guide.  (yes, it was around way back then, even if videos and dvds weren’t)

Fortunately, my family was willing to humor me and the my need for popcorn balls. A couple days later, Shaun set about popping some corn while I hunted for a recipe.  We ended up making caramel popcorn instead of balls as it seemed easier. (Note to self: Easier doesn’t always mean better, make balls next time!) 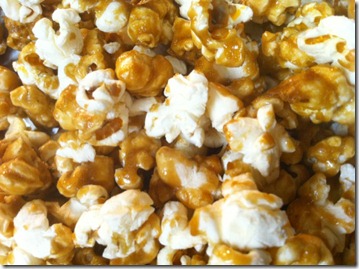 I‘m still amazed that my entire family chose to usher in the new year watching the delightful, yet really cheesy (and looong) musical of my childhood. I’m not naïve enough to think that my nearly adult children will happily hang out at home watching old movies with us.  Yet this year, it was simply magical…