The problem with making an announcement that you are ready to start blogging, is that you have to actually blog! That’s also a good thing, because I think I have a wee bit of “stage fright”  and all those wonderful story ideas zooming through my head have left.  A while back I said that I was taking photos every day.  I’ve got the pictures, but not the words to go with them.  I thought I would work on that for a bit until I get my Writing Mojo back. Come with me, back to January and I’ll fill you in on a few little things.

One of the best things about having a dear friend that just happens to live on a lake, is that she’ll want to share her lake with you.  In the summertime, this is a wonderful thing.  Leisurely canoe rides and feeding the fish while dipping your toes in the clear water.  Not to mention watching the sun set while sipping on an icy daiquiri. Mmmmm….bliss.

In the winter time, things are a little different.  Here in Seattle, it’s well known that we do rain.  Yet, some years, it gets really cold and our world freezes over. 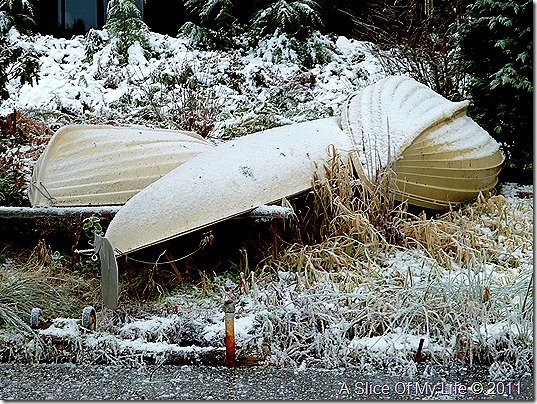 When this happens, I just want to crawl in bed and hibernate until the world thaws out and become habitable again.  My dear friend thinks that this is a very bad idea.  To her, a frozen world is a playground.  Somehow, through her evil threats gentle invitation, I found myself navigating the icy roads to her home, crossing my fingers and hoping for a sudden thaw to melt the lake. 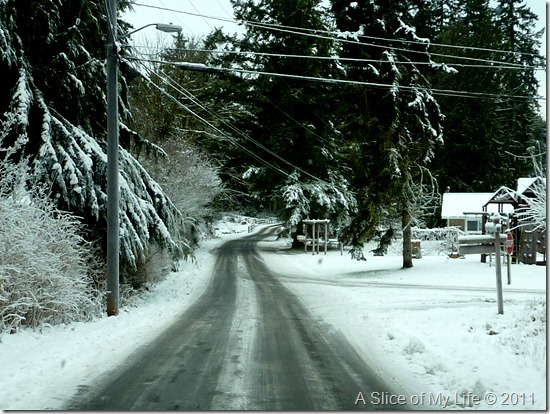 Now, please understand that I don’t do ice skating.  I grew up in San Diego, we like to roller skate…along the boardwalk…on the beach…wearing next to nothing.  Somehow I found myself puffed up like the Michelin Man in several jackets, a pair of ice skates on my feet and and holding on to a chair for dear life trying desperately not to fall on my bottom. (I was instructed to wave in the photo, it took me a looong time to get enough nerve to let go with one hand!) 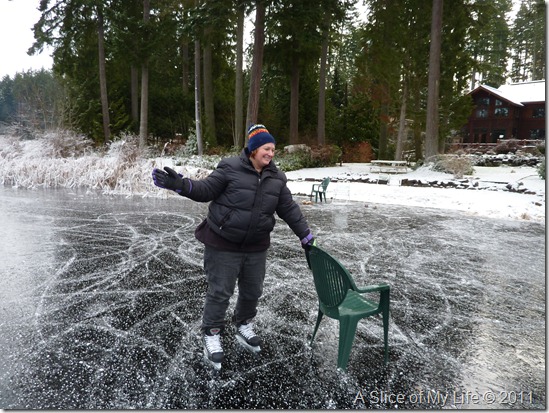 It would seem that if one could roller skate, then one should be able to ice skate with no problem.  Not so.  I tried in vain to smoothly glide along the ice the way that my friend did. I soon learned that letting go of the chair or even keeping my ankles upright didn’t seem to be an option for me.  As far as I was concerned, ice skating had nothing in common with roller skating!

Once I started to relax a bit, I noticed how beautiful it really was. The whole world looked so clean and fresh. I was astounded to look down into the lake and see fish swimming beneath us.  Ice crystals had formed on nearly everything. I had never seen anything so fascinating. Everything sparkled! There were single ice crystals just laying on the frozen lake. I was amazed to see them.  (I’m also amazed at what a great job my phone did capturing them.  There was no way I was going to bring The Beast on that slippery mess!) 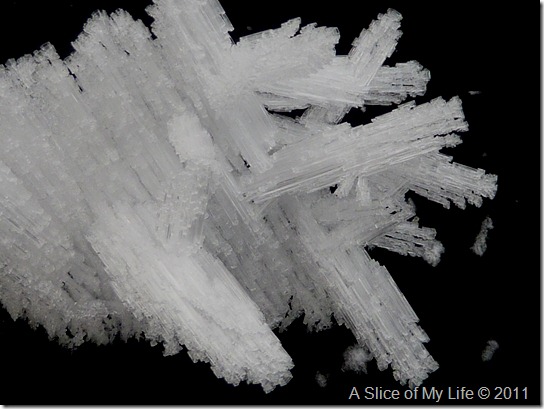 My garden is starting to bloom and already the days are warming. Before we know it, we will once again be launched into those long languid days of summer. As beautiful as it was, it was still really cold for this California native.  Thankfully, those frigid winter days will be long forgotten as we once again play in the sun.

This entry was posted in Adventures, It's all about me!, Random stuff, Ya gotta have friends! and tagged frozen lake, ice skating, winter. Bookmark the permalink.

8 Responses to Walking On Water