When I wrote “Go to an outdoor concert” on my Summer List, I was thinking about one of the Music In The Park series put on by most towns. I had forgotten that Shaun had bought us tickets for Jethro Tull a while back. (It’s amazing how these things work out. Wait until you hear how I’m going to cross a whole bunch of things off my list really soon!)

So late Saturday afternoon, we packed a picnic lunch and headed over to the beautiful Chateau Ste. Michelle Amphitheater. This was the first time I had ever been to one of the winery’s summer concerts. I wasn’t sure what to expect, but it was a dream come true for a people watcher like myself. I was captivated by the crowd as I watched them mill back and forth chattering with friends and strangers alike.

Some, like ourselves, plopped on a blanket and ate home-made sandwiches and drank from plastic cups. Others had brought small cloth-covered tables laden with sumptuous feasts and crystal wine glasses. It didn’t seem to matter how anyone chose to enjoy their dinner, we were all united in the excitement of waiting to see the band.

It wasn’t very long until we could see movement on the stage. You could feel the anticipation building in the air. As the band members stepped on the stage and began readied themselves to preform, we all leapt to our feet and started cheering wildly for them. I guess I hadn’t realized exactly how long Jethro Tull had been around until I started really looking around at the grey haired crowd surrounding me. I just laughed when I learned that Ian Anderson, the group’s lead singer had started his first band before I was even born. You wouldn’t know it from the way he owned the stage. 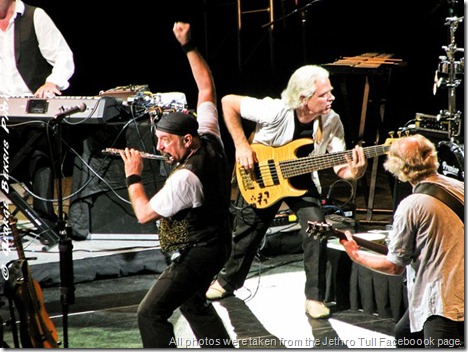 It was a great concert.  This sixty-three year old man jumped and pranced about as though he were at least thirty years younger than he is.  I told Shaun that he made me think of elves or fairies. My Beloved replied that his trademark was more of a Wood Nymph.  I could totally see that. 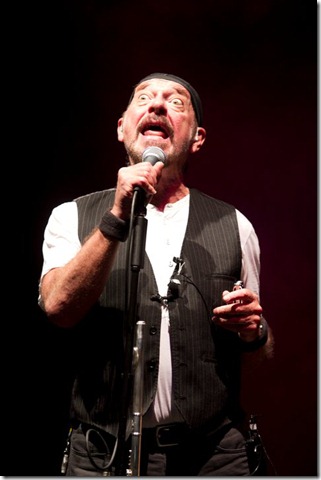 I had never seen the group before, but was charmed by Anderson’s dramatic, yet self-depreciating manner.   It was the first time I was able to put a face and a personality to the music I had been listening to for over twenty years.  (Yikes, that makes me sound really old!)

On the way home we smiled as we reminisced about various portions of the concert.  Things he said, how songs were changed up, the prancing, the flute playing…

Did I say it was a great concert?

3 Responses to Smiling And I’m Happy