At a Girl’s Night Out about a month of so ago, one of my friends mentioned that one of the airlines had just slashed it’s prices.  The next day, it sunk in on me what she had said and I called to ask her which airline it was.  She told me, then asked me where I was planning on going.  Among other places, (Believe me, I can list a whole mess of places I’m just thinking of going to) I said I’d like to go to San Diego to see my folks. Interestingly, it turned out that she had been planning on going to San Diego with her mother and sister.

The seed was planted and over the next few days, a flurry of texts going back and forth resulted in our plan to take a road trip.   I knew it wasn’t going to be just any ol’ road trip when people we knew started independently calling it our “Thelma and Louise Adventure”.

At first we merely rolled our eyes at them (We learned that from our teenagers) then we decided we kinda liked that idea.  So, we’ve decided that I’m Thelma and my good friend is Louise.  We are driving a way cool green convertible (My Jeep) and have agreed that we would remain law-abiding citizens and would not drive off of any cliffs. 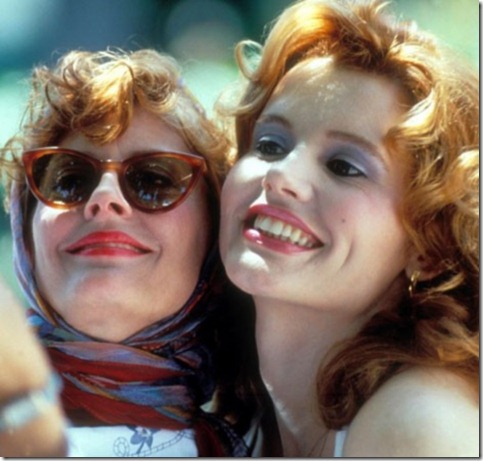 Our adventure starts at the Crack of Dawn tomorrow morning. We don’t know how long it will take to get there as we’ve decided to just “go with the flow”, but our first stop will be in Napa Valley where Louise’s mom lives. (I hear they also keep a bunch of wineries there!) Then I will leave Louise there to spend time with her family and head down South until we meet up again.  (Don’t worry, Mari, I will stop in San Jose to see you!)

I hope you join us on our adventure…it’s going to be interesting!

10 Responses to Call Me Thelma