The Land of The Free

If you live in Seattle and happen to drive a Jeep, one of the first things you do when the weather finally acts like it might be summer, is take your top down.  (And, if you are my husband, take your doors off.) I have to admit that there is something quite wonderful about driving around town, doing errands with the wind blowing through your hair, and the warm sun shining down on you.

I had just climbed back into the Jeep when I noticed something strange in the cup-holder.  On closer examination, I realized it was a little, bitty green worm! As much as the tiny creature grossed me out (Seriously…it was a worm, after all!) the thought that some little guy had fallen into our Jeep to it’s certain death made me sad.

It’s things like this that make me glad I’m the girl in our relationship.  By the simple fact of his gender, Shaun was responsible for picking the worm up and doing…um…something…with it.  (After so many years together, we have a very complex system of which tasks belong to which gender.  They guy is definitely on worm patrol.)

Shaun bravely picked the little worm up and looked closely at him.  He was delighted when he realized we had a very much alive inch worm hitch-hiking in the Jeep.  After playing with him for a moment, my Beloved wondered what we should do with him.  Obviously I we didn’t want to keep him in the vehicle, but putting him down in the parking lot was a certain death.

I spotted a small grassy area a little ways off and suggested we release him there. Of course, Shaun thought that it was a brilliant idea. He then gently placed the worm in my hand and drove over to it. 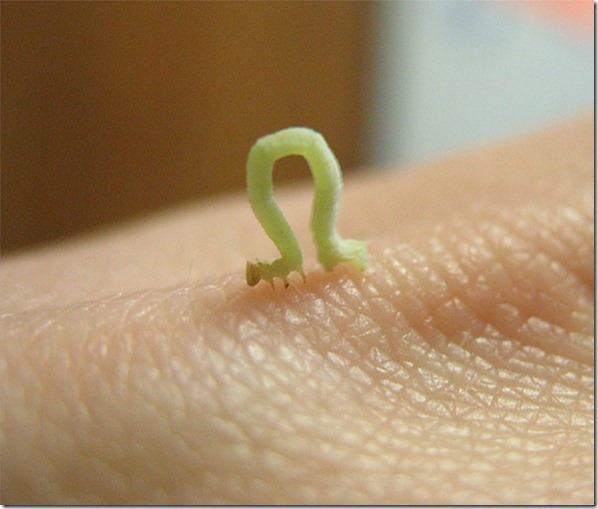 (No, this isn’t our worm.  I was much too terrified that our inch worm  was going to eat me  or stab me with it’s huge fangs or something equally horrible to take a picture.  I borrowed the photo from this lovely site.)

It took all of my courage to not scream and shake the little worm off of my hand.  (Obviously, this was a clear violation of the Gender Code.  Don’t worry, we won’t get into that right now.)

When we got to the grassy clump, I gingerly place the little guy on a blade of the tall grass and wished him well.  Shaun and I simultaneously shouted out “You’re Free!” We looked at each other, then burst into peals of laughter at our similar thoughts.

For those in the Land of the Free (that would be Mr. Worm.) and the Home of the Brave (I claim that title!)

This entry was posted in It's all about me!, Love and Marriage, That Man O' Mine and tagged 4th of July, bravery, inch worm, Jeep, worm. Bookmark the permalink.

4 Responses to The Land of The Free