Nearly a year ago I received a message on Facebook from someone I had known in junior high school.  It was amazing how easily the fifty-thousand or so years it had been since we had last seen each other fell away.  I was happy to find that Mari and I still “clicked.” We emailed, texted and chatted with each other.  It was really great having my old friend back in my life.

When I headed South for our Thelma and Louise Adventure, Mari insisted that I stop along the way to visit with her.  It was a little off the main road, but well worth it.  I was so excited to see my friend again.

After an early morning Farmer’s Market run, Mari decided that she would make me some Chilaquiles for brunch. (I hadn’t a clue what she was about to feed me, but I was open to trying it.) As she sat on the kitchen stool beside me tearing corn tortillas into bits, Mari expressed her admiration for my cooking.  I have to admit that I was baffled.  I’ve never really been known for my culinary skills.

As Mari moved over to the stove and started frying the tortilla bits, she gushed about how she had been at my house for dinner once and my mom had asked me to make some gravy. She said she was amazed that I simply thrown some flour and stuff in a pan and it turned into rich and thick gravy.  Mari  added a spicy tomato sauce to the tortillas and set them to simmer as she continued about how she had watched I had taken some boiled potatoes and turned them into a bowl full of creamy, fluffy goodness.

Mari deftly fried some eggs, then grated cheese on top of them as she reminisced about the simple pot roast we had eaten that night.  Moments later, Mari placed a plate full of heaven in front of me.

“That meal that I made so many years ago, that was easy stuff that I learned as a wee little girl.” I told Mari, “this…these Chee…chee-lay-key-lays? That is what fine cooking is all about.”

My friend laughed and said it was the kind of thing she had learned as a little girl. 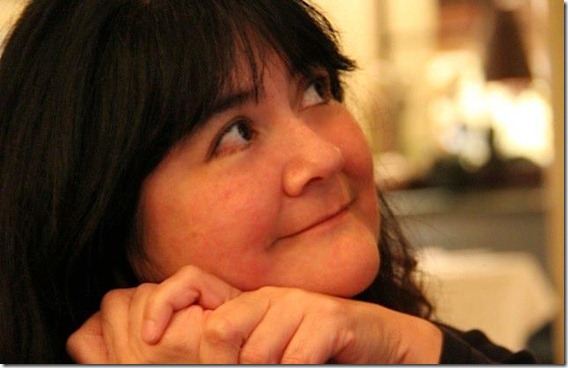 My beautiful friend, Chef Mari.  (Today is her birthday!)

Growing up in different cultures can sometimes cause problems and misunderstandings.  Not with Mari and I.  We’ve figured out that it’s the simple things, those lessons learned at our mother’s feet are what makes the world go around.

Mari is trying her best to get me to head down for a visit again.  She taunts me with those chilaquiles that I fell in love with.  I’m sure if I arrived at her doorstep right now I would be in authentic Mexican food heaven.

I think it’s time to do a little taunting of my own.  I’ve got a ten pound bag of potatoes in the pantry and can whip up a roux in minutes for some fresh (but slightly lumpy) gravy.

What do you say Mari?

This entry was posted in Food, It's all about me!, NaBloPoMo, Ya gotta have friends! and tagged American cooking, chilachiles, Cooking, friendship, mashed potatoes, Mexican cooking, pot roast. Bookmark the permalink.

1 Response to Mashed Potatoes and Chilaquiles