The Mysterious Case of the Disappearing Pie

Despite the fact that we are going to the home of some friends for Thanksgiving dinner, I have been busy creating vegan options for my family to dine on.  One of the things I decided to experiment with whip up last night, were some pies.  Now, fruit pies are easy.  They are also, in my opinion, boring.  I wanted something yummy.

After much consideration, I chose to go with a chocolate cheesecake.  I printed out the recipe that I thought I had used a few years ago and got to work.  As I lovingly shaped the Oreo cookie crust into the pie plate, I realized that I had way too many crumbs for my pan.  (My spring form pan decided to go for a walk some time back. It hasn’t managed to find it’s way back home yet. I don’t think it ever will.) It worked out nicely that I also happened to have too much “cheese” filling for one pie pan as well.  So I popped two pies in the oven, crossed my fingers and hoped these cheesecake pies turned out tasty.

An hour or so later, my family was slowly drawn to the kitchen by the scent of baking chocolate.  First my daughter  jokingly asked if she could have some pie.  She didn’t believe me what I said that she could.

Then Shaun came up and also asked if he could have a pie.  I teased him he couldn’t have a whole pie to himself, but he could share one.  After verifying several times that it really was okay to cut into the pies that were earmarked for Thanksgiving dinner, we were all sitting around eating pie.  Sadly, nobody was all that impressed with this recipe I  had followed.  I concluded that it must not have been the same recipe I thought it was after all.

When I got up this morning, it appeared as though the pie wasn’t as bad as it seemed at first bite.  In fact, somehow, nearly all of the pie had mysteriously disappeared. 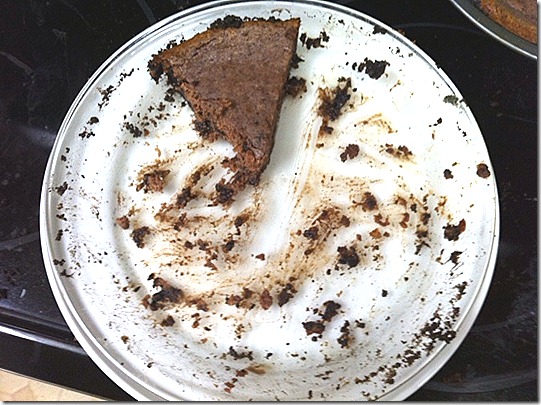 Of course, nobody knew what had happened to the rest of the pie.  They had all had one teeny little slice.  I’m going to blame it on elves.  They are sneaky like that.  I can only hope they like the vegan pumpkin pies that are currently cooling on the counter.

I hope those of you in the States are enjoying a wonderful Thanksgiving.  Those of you living elsewhere…don’t you think it’s a good day for pie?

3 Responses to The Mysterious Case of the Disappearing Pie