The Great Snowpacolypse of 2012

On Wednesday, I posted to my Facebook Page that the national news proclaiming that we we all on the brink of freezing to death here in Seattle, was greatly exaggerated.  Yes, we had a lot of snow, the power had gone out a few times…but really…we were all okay.

Apparently Mother Nature didn’t take kindly to my poo-pooing all of her efforts to totally freak us out.  The very next morning, shortly before five, I woke up and realized that the power had gone out.  As I let the dogs outside, I blearily noted that another couple inches of snow had fallen.  I shrugged it off and went to back to bed unconcerned.  I had faith that the good folks at PSE (Puget Sound Energy) would soon have us up and running again. 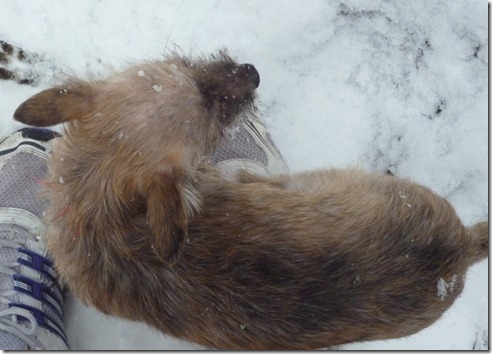 Maggie felt that standing on my feet was the safest option.  No, she’s not spoiled!

Several hours an hour or so later, I woke up shivering.  I  pulled the spare blanket over us and grabbed my beloved iPhone to see what was going on in the world.  Hmmmm….maybe things were worse than I had thought.  PSE was working hard, but over 200,000 homes didn’t have power, there had been an ice storm that closed down our airport, and our governor had declared that the entire state of Washington was in a State of Emergency!

Knowing that the National Guard was ready to come rescue us at any moment told me that maybe I should be just a little more concerned about our well-being.  I decided that my best course of action was to remain very quiet in hopes that this entire mess would be resolved before my family woke up and panicked.  (This philosophy may have something to do with the fact that I have yet to be elected Ruler of the World.)

As luck would have it, Shaun woke up.  My husband isn’t one of those people that can be content to let the National Guard come and rescue us.  (I, on the other hand, had already placed my order for a skinny cinnamon dolce latte and was patiently waiting for it to be delivered)  He insisted that we head out into the world and go exploring. 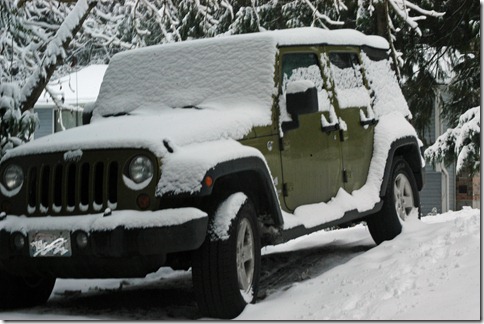 I grew up and learned to drive in sunny San Diego, where we simply don’t “do” snow. So it’s only natural that I do my best to avoid going out in the snow. I’m perfectly happy enjoying it from the comfort of my window.  Shaun, on the other hand,  is proud of the fact that he grew up in the snowy Rocky Mountains of Colorado.  He’s been known to mention how he drove a Chevy Nova with bald tires and bad breaks.  Instead of being scared silly, my husband looks at driving in our Seattle snow as an adventure.

It took a lot of cajoling on his part, but eventually, Shaun convinced Mimi and I to bundle up and trudge through the nearly hip-deep snow to the Jeep.  Then he pointed it down the icy road in front of our home. 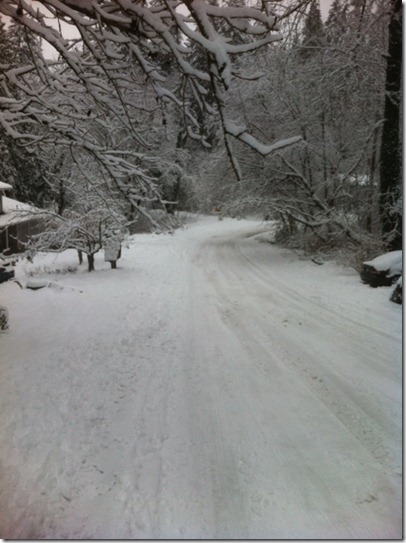 Honestly, it’s hard not to look at this picture and recall the overwhelming feeling of panic.  And the gleeful cackling of my Beloved.

After a few days of heading out to “explore” I gradually managed to calm down and enjoy the ride.  (You didn’t think Shaun would be content to stay home in a cold, dark house when there was exciting things to see, did you?) Everywhere we went, we saw tree branches down, line crews working to restore power, and beautiful white snow.

It’s been an interesting week.  Snow storms, ice storms, wind storms, power outages, and now flooding.  (I refuse to ask what’s next because I’m sure Mother Nature is just waiting for someone to egg her on!) Happily, Seattle has stuck true to her reputation of being an incredibly friendly city.  We’re so grateful to the many friends with electricity that have invited us to weather out the storm in their homes.  And of course we’ve been happy to assist folks without four-wheel drive.  It’s a good feeling to know how well we, as a community, have all pulled together.

As fun as it’s been, I’d rather not do this again.

Hey! Thanks for reading A Slice of My Life. If you liked this post, why not consider liking my Facebook Page or signing up in a reader. I’d be thrilled and you would never miss a post!

10 Responses to The Great Snowpacolypse of 2012