Of Worms and Dads

Every time I look at the home screen on my phone, I have to smile. The photo is of a chubby two- year-old hand proudly holding up a wriggling worm. This, of course, makes me think of my dad. Now some might think that it’s a bit odd to associate one’s father with such a lowly creature as a worm. Not me. 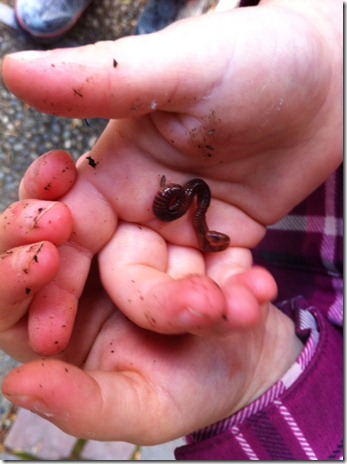 You see, one of my strongest memories growing up is of working in the garden with my dad when I was very young. Well, my guess is that while he was working, I was playing in the dirt. Regardless, one of us came upon a worm. A long, pink, slimy worm. I was terrified, certain that it would suddenly spot me and lurch toward me in full attack mode.

My father, who grew up on a farm, sensed that this was one of those “teachable moments” parents are so very fond of. He gently started to tell me all the wonderful things earthworms do for the soil. I remained unconvinced. Dad decided that instead of using words, he would just show me how harmless worms really were.

I was instructed to hold out my hand. Being an obedient and trusting child, I held out my hand. When my father gently placed the worm in my palm, I shrieked and tossed it as far away from me as I possibly could. Dad sighed in exasperation. He couldn’t possibly let me get away harming creatures and he certainly couldn’t understand how I could be afraid of a simple worm.

I don’t know how long the process of teaching me to tolerate worms went on. I just know that it ended with a frustrated father and a tearful, frightened child. I’m pretty sure we both lost that first battle of the wills. We’ve generally gotten along fairly well, but over the years, Dad and I have gone through many battles. It didn’t seem to matter what it was about, we just knew that there were some things that weren’t open for compromise. Both of us were convinced that we were completely right. (And even if weren’t, it was a matter of principal.)

Looking back, I realize that my father knew a lot more than I ever gave him credit for. I often find myself thinking back about the things he had given me unwanted advice on. Advice that now makes perfect sense.

Thanks Dad, for all those life lessons, you struggled to get through my thick skull. I finally get it. Well, most of them. If you notice, I’m not the one holding that Killer Worm.

This entry was posted in Family, Gardening, It's all about me!, It's all Relative and tagged Dad, Father's Day, gardening, life lessons, worms. Bookmark the permalink.

6 Responses to Of Worms and Dads