Shaun and I had been dating long enough for me to realize that he was The One, when I decided to treat him to my World Famous Chili. He watched with an odd expression on his face as I sautéed ground beef together with lots of onions and garlic. I’m pretty sure he winced as I rummaged around the back of the cupboard and dusted off a jar of chili powder. My Beloved managed to hold his tongue until I reached for the can opener and a couple cans of beans.

“I thought you were making chile?” he asked. When I reassured him I was making the same chili that my mother and mother before her made, he burst out that only Texans made chile with beans. Little did I know that I had just been bestowed with one of the worst insults imaginable.

Apparently the Texans and the New Mexicans had been feuding for decades about everything from chili cooking to fence building. (I can’t help but wonder if Texas knows about this feud. I never heard New Mexico even mentioned when I spent my summers there with my grandparents.) 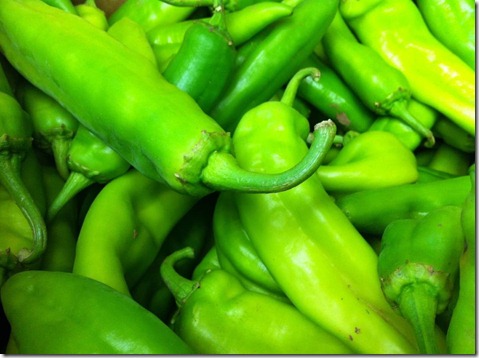 Real chile, according to my favorite New Mexican, was not made with beans or dusty old chili powder. (Seriously? Because I’m convinced that the beans are the best part!) According to Shaun, real chile was made with pork and fresh green chilies. He choked down my World Famous Chili and promised to whip up a batch of his chile. It was a lot of work, and it was tasty (although spicier than I cared for) and the sopapillas that went with it were heavenly.

Nearly twenty-five years later, Shaun still insists that his chile is the best. He also insists that chilies grown in the Hatch Valley are the only ones worth eating. So he ordered 50 pounds of them with plans to roast and freeze them.  The good part about this was that he had to empty out our oft-neglected downstairs fridge to make room for the two huge boxes they came in.

At the crack of dawn on Saturday morning, Shaun woke me up saying it was time to roast his chilies.  I asked him to consider waiting a few hours so the neighbors weren’t woken to the stench of toxic chile fumes. Shaun was aghast at the thought that someone wouldn’t like the heavenly scent of roasting chilies, but agreed to wait a few hours anyways.

Normally, he would roast them on the outside grill.  For reasons that escape me, he decided to broil them in the oven.  He worked hard getting just the perfect char on them. 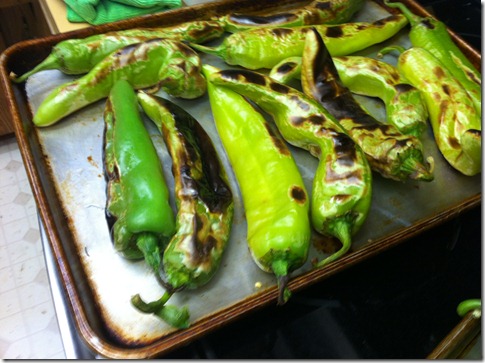 These ones were just getting turned over to get the other side.

Once the chilies were roasted, they needed to be de-skinned. I suggested that Shaun wear gloves to keep from irritating his skin, but he insisted that he had to be able to feel when they are just right. 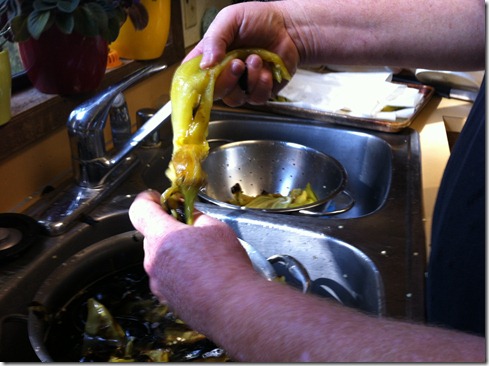 The final step was to carefully pack and vacuum seal them before lovingly placing them in the freezer to be enjoyed for months to come.  Well…for Shaun to enjoy.  I’m pretty sure he muttered that spending six back-breaking hours slaving over them was only to be enjoyed by those who truly appreciated his efforts.

I do appreciate his labor of love.  However, I’d rather eat cold beans than dine on what he considered to be a gourmet meal of a peanut butter and chile sandwich.  Just don’t tell him I said that!

NOTE: You may have noticed that chili is spelled two different way.  That’s because somebody insists that real chile is spelled with an  “e” at the end.  I made the chile he was talking about spelled that way.  My chili (you the good kind with beans) ends with an “i”  Oh the things I do for matrimonial harmony.

9 Responses to The Chili Lover