This morning I dropped my youngest daughter Mimi and her fiancé Jaime off at the airport before the sun had come up. They were headed to Florida to see Jaimie’s grandmother and then go on a cruise to the Bahamas with her. I must have been thinking about that, or perhaps just zoning out from a lack of sleep and caffeine, when I realized I had taken the exit into the huge parking lot instead of back to the freeway. As I wandered through the nearly empty parking structure maze searching for the exit, I thought about the mishaps I had made in the last day or so and had to laugh at myself.

I had spent the day before with my daughter and her love. The three of us went shopping, had lunch and mostly just hung out together. For dinner, I had told Mimi that I would make her anything she wanted for her last meal at home. After a bit of deliberation, she settled on the One-Pot Spaghetti that I had found on Pinterest a few years ago. Spaghetti is one of her very favorite dishes in the world. Apparently the red sauce spaghetti is traditionally topped with is one of Jaime’s least favorites. So the one-pot recipe, with it’s creamy, light tomato sauce was a compromise that everyone would enjoy.

As I started pulling the ingredients out of my pantry, Mimi came into the kitchen. Handing me a printed out recipe, she informed me that it hadn’t tasted quite right the last couple times that I had made it and she wanted me to actually follow the recipe. I have to confess that I’m not really great at following recipes…I like to add a little of this and a little of that, and maybe change things around a bit. Usually, it’s an improvement. Apparently not always.

I agreed to follow the recipe exactly-ish. The major exception being that I planned to cut it in half as I didn’t want to have leftovers in the house after they had left the state. So, I got to work creating my baby girl’s favorite meal. Once I had all the veggies chopped and ready to go into the pot I reached for the linguini noodles that the recipe called for. Only it turned out that I only had angel hair pasta. Whole-wheat angel hair pasta.

I decided to start cooking the veggies first as I knew the thinner pasta would take less time than the linguini noodles the recipe called for. I just hoped the whole-wheat wouldn’t have any adverse effect aside of making it healthier.

It wasn’t long before a heavenly scent filled the air. A small taste confirmed that the broth tasted just as good as it smelled. It was time to add the pasta. Without really thinking it through, I decided that the noodles were so tiny I would need more of them, so I dumped the whole box in. That was a huge mistake. 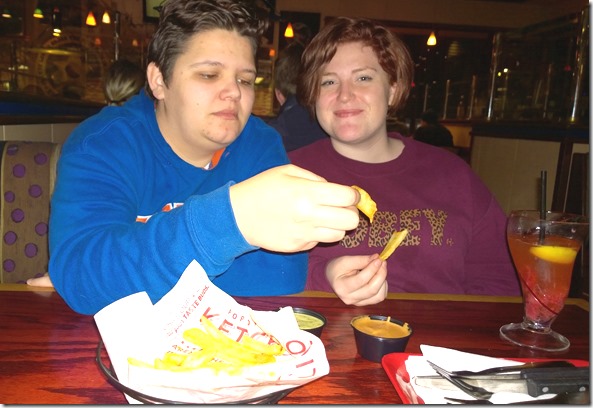 I tried my best to correct the disaster of a meal, but it had turned into a thick, gooey, inedible mess.

Instead of lovely home-cooked spaghetti dinner I had intended on feeding Mimi and Jaime, I ended up taking them out to Red Robin for dinner.  One can only hope they forget how he disastrous the last meal was by the time they get home (Although, knowing my family, this is going to be one of those things brought up time and time again.) and remember the fun, yet crazy we had getting it.

4 Responses to The Last Meal