When I was a young girl, I had come to the conclusion that the magical changing of the leaf colors in autumn was due to the work of an elusive woodland elf. In my mind, his name was Henry. He, of course, was one of Jack Frost’s many cousins. Instead of waving his magic wand and transforming our world into a Winter Wonderland with frost and delicate icicles, Henry merrily splattered fiery hues of orange, red, yellow and brown on most of the leaves for his own amusement. 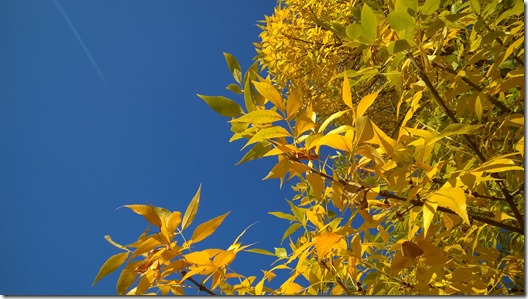 Somewhere on the way to adulthood, I realized that a paintbrush wielding elf named Henry was highly unlikely. I have to confess that if the glorious colors of fall couldn’t be a result of magic, then it didn’t matter to me. If I did think about it, I was vaguely aware that it had something to do with the weather getting cold and making the leaves die. Oh, and it was pretty to look at. Recently, I learned that fall color actually can be explained by a certain kind of magic. It’s a progression called senescence, or the process of aging and death. It’s all explained by science.

It turns out that fall color actually starts long before fall. All summer long, leaves bask in the long hot days, soaking up the sunshine and converting it into sugars using chlorophyll in the process of photosynthesis. Each leaf makes more than it needs, so it passes glucose and minerals such as nitrogen, phosphorus and potassium into the xylem of the tree in a process called translocation. They are then stored in the roots and stems of the tree. In return, water is passed back to the leaf so that it can continue its food making efforts.

Towards the end of summer, the tree “notices” that the daylight hours are getting shorter. This is a signal that it’s time to stop food production and start shutting down for the winter. The leaves are no longer needed as there isn’t enough light or water available in the winter for them to produce food.

A layer of cells called the “abscission” or separation layer that is located between the tree stem and the petiole or stalk of the leaf starts to thicken, limiting the flow of resources between the tree and the leaf. When the flow between the leaf and tree begins to be cut off, there is still glucose trapped in the leaf. This is when the color magic happens.

The chlorophyll that is used in food production, and makes the leaf appear green begins to break down and isn’t replaced, as it is all summer. As the green coloring fades, the other pigments that are always present in the leaf, but masked by the overpowering chlorophyll begin to shine. The yellow pigments are called xanthophylls and the orange ones are carotenoids. Brown colorings come from tannin, a waste product.

Some trees, have more pigments called anthocyanin that, when exposed to abundant sunshine, “cook” the trapped glucose and develop into bright reds, purples and bronzes. Cool night temperatures, paired with sunny days create the best color as it encourages the formation of the anthocyanins. Researchers are not quite clear why a leaf would expend the extra energy to develop these colorings when the leaf will soon fall off. One theory is that it serves as an anti-freeze allowing the leaves to last longer. Other thoughts are that the reds may serve as a warning for pests not to lay eggs or as a sunscreen or even to limi water loss. 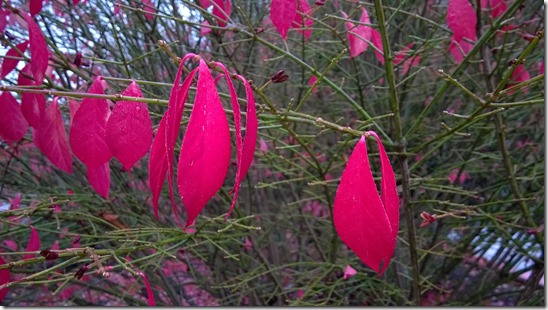 Interestingly, color displays are different in various areas of the world. The amount of sunshine, temperature changes and soil moisture as well as plant genetics all play a huge part in the array of fall color. It’s fascinating to think that the same exact cultivar of tree can look stunning in one area, and just look average or even boring in another area of the world.

All too soon the abscission layer becomes completely blocked and the leaf tears off, gently floating to the ground. If left there, the warm blanket of leaves will help insulate the tree and eventually start to break down, thus even after it has fallen, supply the tree with its remaining nutrients.

Somehow, I think this process is even more exciting and magical than a woodland elf with a bucket of paint. I’d like to think that my old friend Henry would agree.

This entry was posted in Gardening, Horticulture. Bookmark the permalink.