When I was about twelve or thirteen, one of my girl friends and I were allowed to take the city bus to Third Avenue.  This was the downtown area of our small city, filled with a plethora of small shops and eateries.  We felt so grown up on our exciting adventures of lunching and shopping.

One of the doors that we always passed on our rare jaunts was intriguing to me.  There were two signs on the door that always seemed to be propped open.  One announced that it was for the Veterans of Foreign Wars. The other boldly stated that nobody under the age of twenty-one was to come inside.

The mystery of what lay beyond that dark and smoky doorway nearly drove me nuts. My over-active imagination visualized dashing young men in a variety of uniforms, speaking with exotic accents, wearing peg legs and eye patches. I imagined them sitting in that gloomy room speaking in reverent tones about the battles they had fought, and of course won, upon the shores of somewhere far, far away.

I remember peering through that door hoping to catch a glimpse of a handsome stranger. Yet, being the rule-follower that I was, dared not cross the the threshold until I had reached the ripe age of twenty-one.  How I longed to see what was beyond that doorway.

It’s interesting to see the perspective that several years of wisdom can give us.  I still don’t know what was behind that door that is no longer on Third Avenue.  I’d guess that it was a bar, but beyond that…maybe some sort of support group? I have no idea.

I do know that there is nothing romantic about war. I also know that there is a lot more to being a veteran than fighting in one.  Men and women serve our country in so many ways.  Some fly helicopters, some are mechanics, others peel potatoes in the mess hall to nourish our troops.  All have important jobs to protect the freedoms that have been fought for all of us, since the beginning of our great nation.

I love the stories I hear of returning troops being applauded in airports. The tales of strangers that come up members of our armed services just to thank them for all they have done.  Shamefully, we haven’t always treated our troops with such honor.  I’m glad that we live in a time that now treats them as the heroes they are.   I encourage you to take a moment today to pause and think of our vets. And all the sacrifices that they and their families have made. 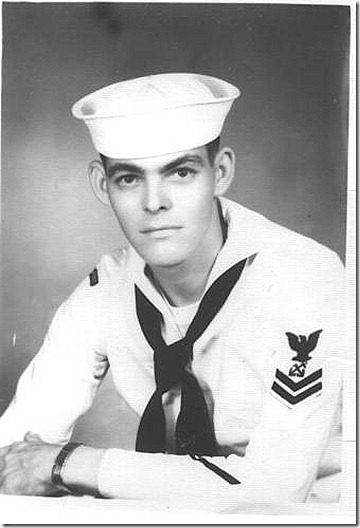 My father, when he was a dashing young sailor.  (Who always refused to wear an eye patch or a peg leg.)